The patient was ferried by a Pawan Hans helicopter of the Lakshadweep administration and admitted to INHS Sanjivani (Naval Hospital) immediately upon arrival. 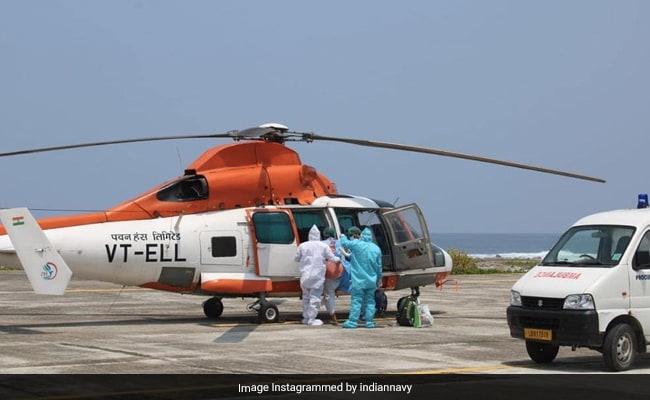 The Indian Navy extended its facilities at Naval Air Station, INS Garuda for the air evacuation of a 75-year-old COVID patient from the island of Kalpeni in Lakshadweep to Kochi for treatment.

According to an official statement of Southern Naval Command, the patient, also suffering from a fracture (neck of femur), was ferried by a Pawan Hans helicopter of the Lakshadweep administration on Wednesday and admitted to INHS Sanjivani(Naval Hospital) immediately upon arrival.

"The patient is being provided medical care as agreed upon by the Southern Naval Command, based on a request from the UTL Administration. The Naval Hospital has reserved ten beds for patients from the Lakshadweep administration," the statement said.

"The vessel is now proceeding to the island of Kavaratti to disembark 25 filled oxygen cylinders and embark six empty cylinders of Amini island. The support operations are being conducted by the Naval Detachment at Androth under the guidance of Naval Officer In Charge (Lakshadweep) under the aegis of Headquarters, Southern Naval Command," the statement added.