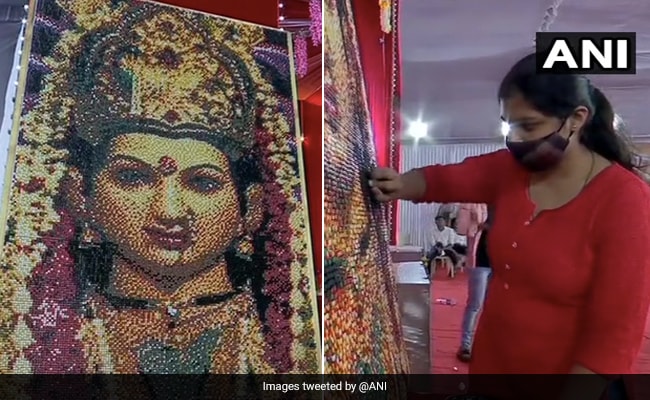 Six-foot Goddess Durga built with over 30,000 push pins in Mumbai

Idols of Goddess Durga for the Durga Puja and Ganpati for Ganesh Chaturthi are often known for their unique and offbeat look. This year, an idol of Goddess Durga has been created with 31,000 push pins in Mumbai. A mosaic artist in the city has created a six-foot portrait of Goddess Durga using thousands of push pins during Navratri. "It took me 36 hours to create this mosaic art with the help of six people. I have used pins of six colours," Chetan Raut, the artist, told news agency ANI.

Navratri started on Saturday amid the Covid pandemic across India. Durga Puja is officially set to begin on October 22, with Shasthi or the sixth day of Navratri.

Maharashtra: A mosaic artist in Mumbai has created a 6-feet portrait of Goddess Durga using 31,000 push pins during #Navratri.

"It took me 36 hours to create this mosaic art with the help of six people. I have used pins of six colours," says Chetan Raut, the mosaic artist. pic.twitter.com/pa7vetAphz

The festive spirit has been dampened by the pandemic this year but not the creativity of the artists and the organizers. In Kolkata, a unique Durga idol has been created resembling a migrant woman with her four children - Lakshmi, Saraswati, Kartik and Ganesh. Photos and videos of the 'migrant Durga' have gone viral with thousands of people sharing it on social media.

Not only the goddess, pandals have been built in West Bengal looking like what we see in photos as the coronavirus - a round structure with pointed nail-like things on it.

During Ganesh Chaturthi, there were many Ganpati idols built with the globe at the feet of the god depicting the deadly virus.

For Durga Puja and Navratri this year, every state government has strict guidelines in place to make sure social distance is maintained. Doctors across the country including the union Health Minister Dr Harsh Vardhan have appealed to people to enjoy the festivities at home with family and avoid crowded placed.