Sonia and Rahul Gandhi, along with and senior Congress leader Oscar Fernandes have challenged in the Supreme Court the Delhi High Court's September 10 verdict which dismissed their plea against the re-assessment of their tax for 2011-12. 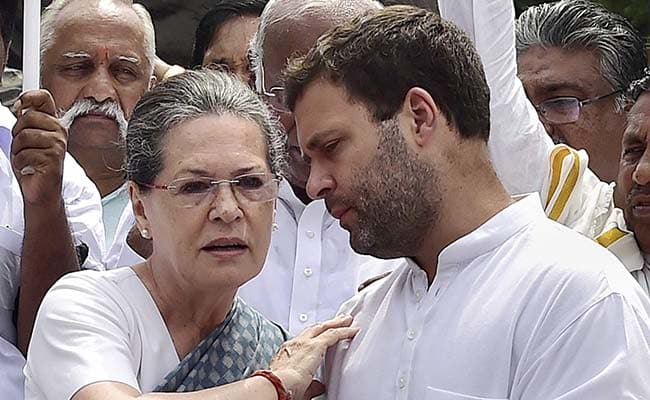 Sonia and Rahul Gandhi have appealed to Supreme Court to allowing re-assess their income tax for 2011-12.

The Supreme Court Tuesday said it would hear in August the appeals filed by Congress President Rahul Gandhi and his mother Sonia against the Delhi High Court order allowing re-assessment of their Income Tax for 2011-12 in connection with the National Herald case.

"List the further hearing on this batch of appeals in the week commencing August 19. We grant liberty to the petitioners to approach the ITAT, Delhi, for expeditious hearing and final disposal of appeal...," the bench said in its order.

Sonia and Rahul Gandhi, along with senior Congress leader Oscar Fernandes have challenged in the top court the Delhi High Court's September 10 verdict which dismissed their plea against the re-assessment of their tax for 2011-12.

During the hearing on Tuesday, the bench initially observed that it can ask the ITAT to expedite the proceedings pending before it in the matter.

It said: "You have challenged the cancellation of registration before the tribunal. We may have some difficulty if suppose we say that the cancellation was bad. So proper procedure would be to wait for ITAT order. We will then have the benefit of the tribunal's order. If you succeed there, then issue of re-opening goes."

To this, senior advocates P Chidambaram and Kapil Sibal, appearing for the petitioners, said, "Yes, that will be proper".

Additional Solicitor General Sanjay Jain, appearing for the Income Tax department, said that proceedings pending before the ITAT was different from the appeals before the top court.

"Further hearing in these appeals should not be linked with the outcome of the ITAT," Mr Jain said.

However, the bench told Mr Jain, "Therefore, carefully we have not said that list the matter after decision of ITAT".

On January 8, the I-T department had informed the top court that an assessment order (AO) with respect to tax of Rahul and Sonia for 2011-12 in connection with the National Herald case has been passed but has not been given effect.

The tax matter is related to the National Herald case in which other the Congress leaders are also facing criminal proceedings.

On December 4, last year the top court had allowed I-T department to re-assess the tax of the top Congress leaders. It had, however, restrained the department from "giving effect" to its order.