The Bison aircraft was on an operational sortie from Suratgarh in Rajasthan when it crashed in Langeana village on Thursday night. 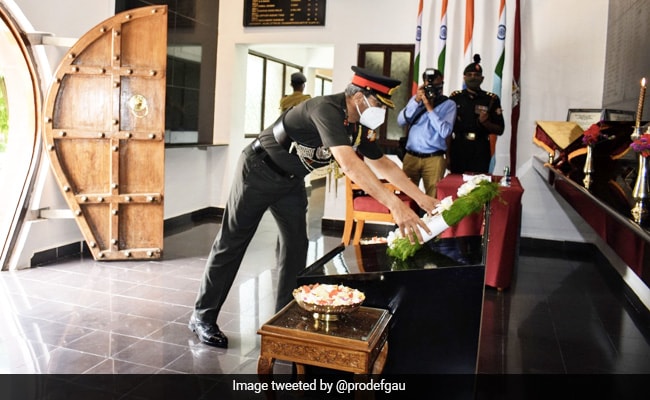 A wreath laying ceremony was organized in the Honour of Late Sqn Ldr Abhinav Choudhary.

The National Defence Academy (NDA) paid homage to Squadron Leader Abhinav Choudhary who died in a MiG-21 crash in Moga in Punjab a couple of days ago, an official said on Sunday.

The Bison aircraft was on an operational sortie from Suratgarh in Rajasthan when it crashed in Langeana village on Thursday night.

A wreath-laying ceremony was organized at the Hut of Remembrance on Saturday in honour of late Sqn Ldr Choudhary, with Lieutenant General Asit Mistry, Commandant of NDA, paying homage along with others, a statement from the premier military institution said.

"Sqn Ldr Abhinav Choudhary was an alumnus of 124 NDA Course, R Squadron and passed out in May, 2013. After passing out from the Air Force Academy, he was commissioned in the fighter stream of the Indian Air Force. Today, as his name gets inscribed in golden letters with full military honours in the sacred Hut of Remembrance, his martyrdom will continue to inspire future generations of NDA cadets. The NDA fraternity offers heartfelt condolences to the bereaved family in this hour of grief," read the statement.

The ''Hut of Remembrance'' at NDA is a sublime cenatoph that commemorates the sacrifice of ex-NDA officers from the armed forces who lay down their lives in the line of duty.