The National Conference distanced itself from the sloganeering by party MLA Mohammad Akbar Lone which came even as the operation to flush out terrorists from the Sunjwan camp was underway. 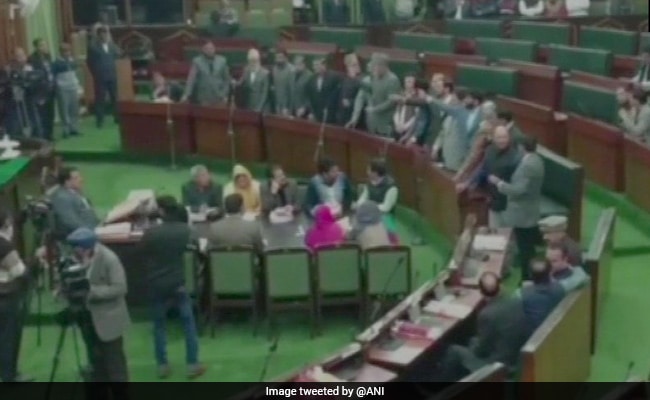 As the situation became chaotic the speaker adjourned the House at 10:15 am.

Jammu: A senior lawmaker of the National Conference today raised Pro-Pakistan slogans in the Jammu and Kashmir Assembly after BJP members condemned the neighbouring country over the terror attack on an Army camp in Jammu.

The National Conference distanced itself from the sloganeering by party MLA Mohammad Akbar Lone which came even as the operation to flush out terrorists from the Sunjwan camp was underway.

As soon as the house assembled in Jammu, the legislators, cutting across the party lines, condemned the terror attack and demanded a statement from the government.

Speaker Kavinder Gupta made some remarks which led to high-pitched sloganeering against Pakistan by the BJP members.

National Conference legislators Javed Rana, Ali Mohd Sagar, Akbar Lone, Abdul Majid Larmi and others trooped into the Well of the House seeking an apology from the speaker.

The situation in the house then became more chaotic and Speaker Kavinder Gupta adjourned the House at 10:15 am.

Talking to reporters, Mr Lone said he had shouted pro-Pakistan slogans only in reaction to the BJP which, he claimed, had shown that they hate Muslims.

"The statement of Speaker Kavinder Gupta shows what they have in their mind," he claimed.

Later, the speaker expunged his remarks.

The National Conference condemned the slogans, terming them unacceptable.

Party spokesman Junaid Azim Mattu tweeted, "Just spoke to chief NC Farooq Abdullah sahib. Dr Sahib and entire party is of the unequivocal stand that NC MLA from Sonwari Akbar Lone had spoken out of turn and his slogans in assembly were completely unacceptable to the party."

Mr Mattu said the National Conference chief stated that Mr Lone should not forget that he belonged to the party which had rejected the two-nation theory.

"The party disowns and condemns his remarks," he said.

Promoted
Listen to the latest songs, only on JioSaavn.com
Party's working president Omar Abdullah, in a separate tweet, said he endorsed the party president's view and the party would not say anything more on the issue.

"We need to focus on the unfortunate developments in #SunjwanArmyCamp and not get distracted by misplaced slogans," Omar said in another tweet.