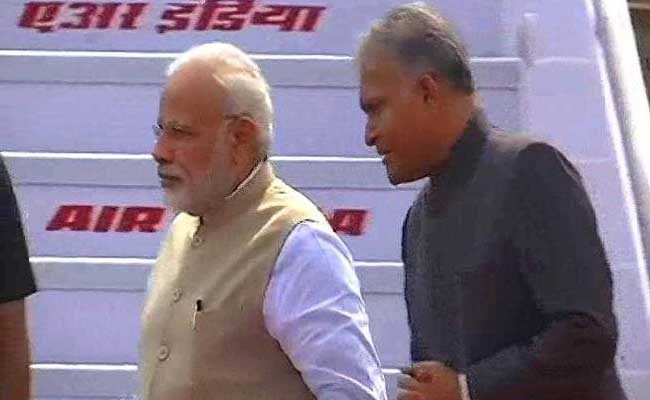 PM Narendra Modi today arrived in Delhi after his two nation day to China and Myanmar. During his visit he attended the two-day BRICS Summit in Xiamen. Prime Minister Narendra Modi arrived in Myanmar's capital Naypyidaw on Wednesday. He met Myanmar President Htin Kyaw. According to officials, the two discussed the issue of rising violence in Myanmar's western state of Rakhine. PM Modi also pushed for greater progress on Indian infrastructure projects. Keeping his promise of 'Act East' policy, it was PM Modi's first bilateral visit to Myanmar where he cemented ties, especially with China strengthening its influence on the country. Foreign Ministry official Sripriya Ranganathan had said earlier that the best way to reduce tension in Rakhine is through development efforts, such as the Kaladan transport project there. PM Modi met Myanmar leader Aung San Suu Kyi and visited the heritage city of Bagan and a Hindu temple. He also spoke about a trilateral highway project connecting India's northeast with Myanmar and Thailand.

PM Narendra Modi arrives in Delhi after attending BRICS Summit in China and concluding his bilateral visit to Myanmar. pic.twitter.com/1cMo9uFbs2

I thank the people and Government of Myanmar for their exceptional hospitality during my visit to the beautiful nation of Myanmar. 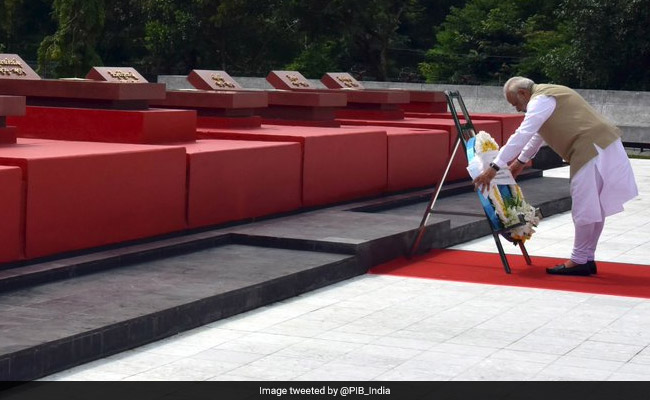 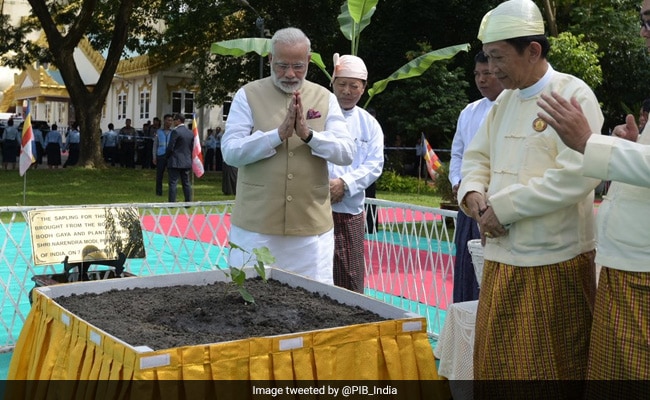 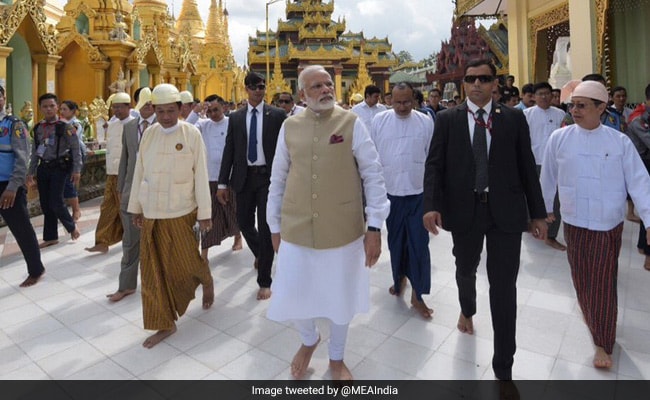 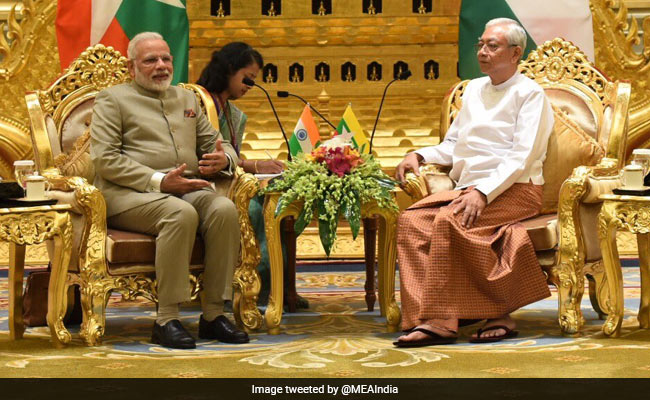 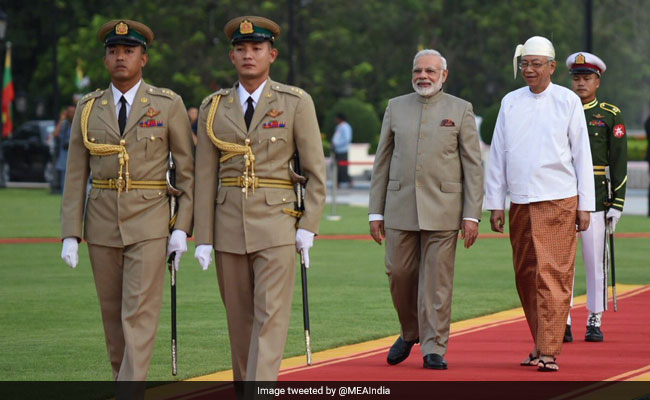 Prime Minister Narendra Modi, who arrived in Myanmar's capital Naypyidaw today, will hold wide-ranging talks with Myanmar's State Counsellor and de facto leader Aung San Suu Kyi on Wednesday, news agency PTI reported. PM Modi is expected to raise the issue of the exodus of the ethnic Rohingyas into neighbouring countries. India is also concerned about Rohingya immigrants in the country, and has been considering to deport them. Some 40,000 Rohingyas are said to be staying illegally in India, PTI reported. Prime Minister Narendra Modi is welcomed by Myanmar President Htin Kyaw before both inspect the guard of honour in Myanmar's capital Naypyidaw today. Both leaders will discuss a range of issues, from bilateral ties to trade. 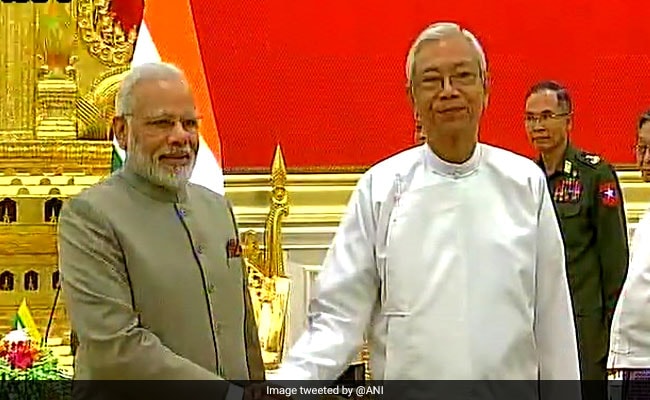 Prime Minister Narendra Modi, who reached Myanmar's capital Naypyitaw today, will look at strengthening existing cooperation in areas of security and counter-terrorism, trade and investment, infrastructure and energy, and culture. PM Modi had said he hoped his visit will help in charting a roadmap for closer cooperation between the two countries. Both countries will review developments in bilateral ties with a focus on "extensive" programme of development cooperation and socio-economic assistance that India is undertaking in Myanmar, PM Modi had said before he left India. 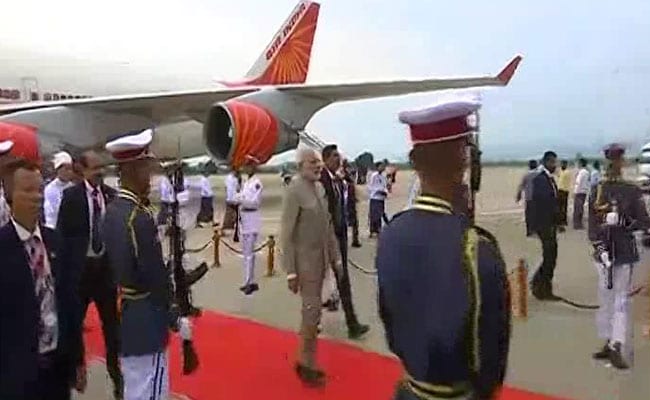 I thank the Chinese government & people for their warm hospitality during the BRICS Summit. Leaving for Myanmar for a bilateral visit.

Sep 05, 2017 12:29 (IST)
Since August 25 nearly 90,000 villagers have evacuated to Bangladesh after a military counter-offensive against insurgents killed at least 400 people.
Sep 05, 2017 12:27 (IST)
According to Indian foreign ministry official Sripriya Ranganathan, the best way to reduce tension in Rakhine is through development efforts, such as the Kaladan transport project there.
Sep 05, 2017 12:23 (IST)
India seeks to boost economic ties with the resource-rich Myanmar, with which it shares a 1,600-km (1,000-mile) border.
Sep 05, 2017 12:22 (IST)
PM Narendra Modi will discuss the rising violence in Myanmar's western Rakhine state and push for greater progress on long-running Indian infrastructure projects, officials said.
Sep 05, 2017 12:22 (IST)
As PM Modi concludes BRICS Summit in China, he leaves for the first bilateral visit to Myanmar. He will arrive at the capital city of Naypyidaw and meet President Htin Kyaw on a three-day visit.