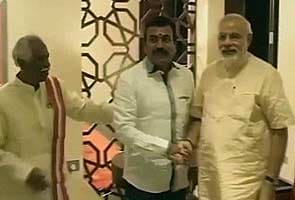 Mr Modi was accorded a grand welcome by the BJP leaders when he arrived at the Begumpet airport in Hyderabad on Sunday morning to address 'Navabharata Yuvabheri' (youth convention for a new India) at the Lal Bahadur stadium.

This will be Mr Modi's first public meeting in the Andhra Pradesh capital after being appointed the BJP's poll panel chief in June.

Police have made elaborate security arrangements for the rally and imposed traffic restrictions near the venue.

Mr Modi would kick-start the BJP's election campaign with a call to the people to "free the country from Congress' misrule", Mr Naidu had said earlier.

Promoted
Listen to the latest songs, only on JioSaavn.com
During his day-long visit to the city, Mr Modi would interact with the BJP state unit office-bearers and unveil a statue of Sardar Patel at a school.