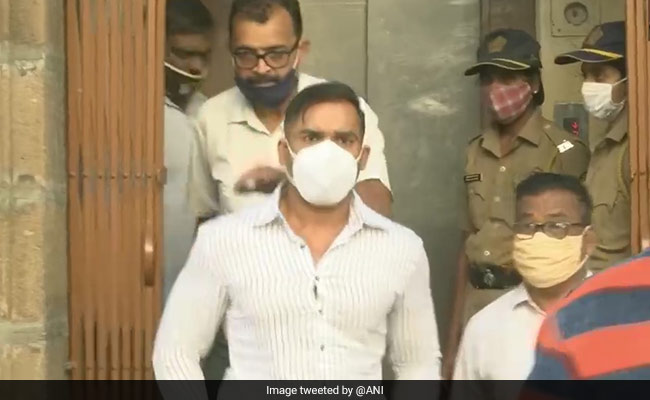 The Narcotics Control Bureau arrested Sameer Khan on Wednesday in a drugs case.

Son-in-law of Maharashtra cabinet minister Nawab Malik, Sameer Khan, who was arrested by the Narcotics Control Bureau (NCB) in a drugs case involving British national Karan Sajnani, is suspected to have financed the supply of imported drugs, agency sources have said.

Khan was arrested on Wednesday after being questioned at the NCB's Mumbai office for many hours. He was summoned after Sajnani named him during interrogation.

Sources added that there is a lot of digital evidence that links Khan with Sajnani, who was arrested last week after recovery of over 200 kg of marijuana, including some imported strains like OG Kush.

NCB sources said they have recovered many chats, voice notes and recorded calls from Khan's phone which was confiscated after his arrest and has been sent for forensic examination.

Khan and Sajnani were like partners and had started working together some 15 months ago, agency sources said, adding that the duo reportedly planned something big.

Sajnani allegedly imported different kinds of drugs, including four to five different strains of marijuana from Seattle to Mumbai, and Khan financed these transactions, they said.

Sameer Khan is a co-owner is a fitness and grooming enterprise, and also owns a local sporting league. He allegedly channelled the drugs money through Rahila Furniturewalla, another accused arrested along with Sajnani.

NCB sources added that Sajnani mixed the imported drugs with a so-called herbal mix, packed it in pre-rolled cigarettes before selling to his clients, including Bollywood celebrities. A list of his clients was recovered during last week's raids.

This mix was allegedly procured from a workshop in Uttar Pradesh's Rampur. The owner of this workshop has been identified as Ali, who is missing and the probe agency has launched a search to track him, they said.

Agency sources said an international probe is needed to crack this network of drugs supply.

After Sajnani's arrest, the NCB also arrested co-owner of Mumbai's famous 'Muchhad Paanwala' Ramkumar Tiwari. He was arrested after the NCB recovered 0.5 kg marijuana - allegedly supplied by Sajnani - from his shop.

Tiwari's south Mumbai establishment is known for being a favourite among Bollywood personalities.

The raids that led to Sajnani, Tiwari and now Khan are part of a larger probe into allegations of a film industry-drug cartel nexus that emerged in the investigations into the death of actor Sushant Singh Rajput in June last year.

Meanwhile, Mr Malik said nobody is above law and it should be applied without any discrimination. In a post on Twitter, the NCP leader, without mentioning any incident, said the law will take its due course and justice will prevail.