Pakistan-Sponsored Narco-Terror Module Busted: According to the Jammu and Kashmir Police, the recoveries from the 3 terrorists included 21 kg of high-quality heroin, which is valued at around Rs 100 crore in the international market. 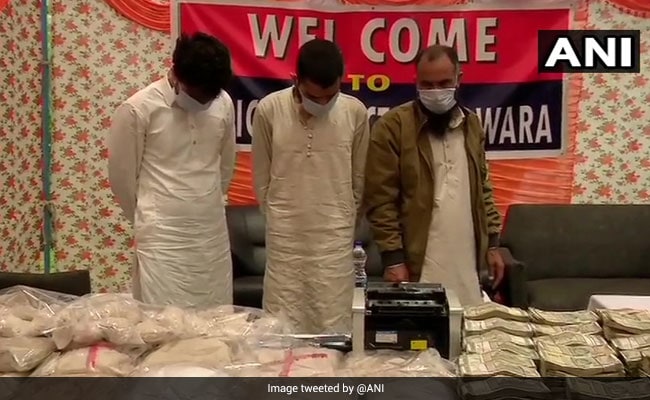 Jammu and Kashmir's Handwara Police today busted a huge Pakistan-sponsored narco-terror module in which three terrorists of the Lashkar-e-Taiba (LeT) were arrested.

"The arrested persons were in touch with their Pakistan handlers. 21 kg heroin, Indian currency with the value of Rs 1.34 crore were seized from their possession," Superintendent of Police, Handwara, GV Sundeep Chakravarthy said.

"The three have been identified. The main accused is Iftikhar Indrabi, a notorious drug smuggler who has several FIRs registered against him. The second man is his son-in-law Momin Peer and the third is Iqbal-ul-Islam. More arrests are going to take place in this module," he added.

Other members of the narco-terror module have also been identified and efforts are on to arrest them.

The senior police officer said that "The three were peddling drugs to financially help the Lashkar-e-Taiba terrorists in Jammu and Kashmir. It is a very big hawala racket where the money is transferred without money movement and financed for terrorist activities."

According to the Jammu and Kashmir Police, the recoveries from the 3 terrorists included 21 kg of high-quality heroin, which is valued at around Rs 100 crore in the international market.

Cash of Rs 1.34 crore and a cash-counting machine were also recovered, the police added.

A case under the relevant sections of the law has been registered at the Handwara police station, the police said, adding that a special investigation team (SIT) was formed for an in-depth probe into links between terror outfits, radical elements, smugglers and other anti-national elements.

(Inputs from ANI and PTI)