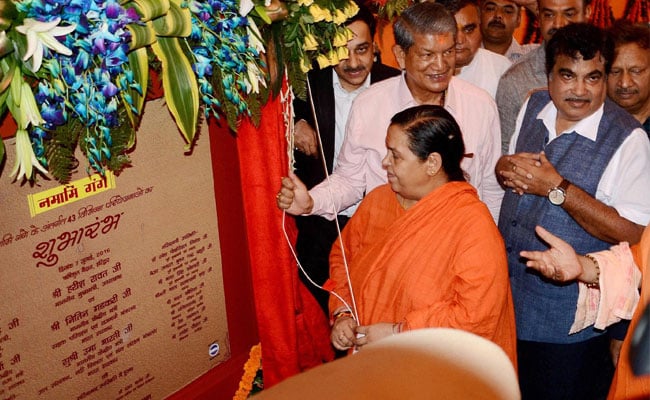 Haridwar: Holding that "wrong planning" led to the pollution in Ganga, Union minister Uma Bharti on Thursday launched 43 projects worth Rs 250 crore under Namami Gange programme in Uttarakhand, saying that the Modi government is taking corrective steps to cleanse the river.

"The Ganga has not been polluted because of untreated water as much as because of wrong planning. Projects being launched under Namami Gange are corrective steps to atone for what has been done over the years to dirty the river," she said in Haridwar.

The Union Minister for Water Resources, River Development and Ganga Rejuvenation said that the ambitous scheme of the Centre will not only cleanse the river and maintain its flow, but will also ensure that the Rs 4,000 crore spent on the river under Ganga Action Plan in 29 years since 1985 (till 2014) do not go waste.

Announcing that the Centre is mulling passage of a legislation called the Ganga Act in Parliament for the success of Namami Gange, Ms Bharti said industries will not just be debarred from dumping their untreated waste into the river but treated waste as well will be diverted for irrigation purposes.

The preliminary draft of the Act will be sent to the states for opinion and the final draft will be prepared based on it, she said.

Ms Bharti said the Ganga flows through her veins more than blood and renewed her pledge to begin a Ganga Padayatra in October to create awareness among the people about the advantages of a clean Ganga and how they could contribute to it.

Director of Namami Gange Rajat Bhargav said the projects launched include expansion of the ghats, tree plantation along them, consctruction of sewage treatment plants and developing adequate civic amenities along the banks of the river.

A total of 231 projects worth Rs 1,500 crore are being launched at 100 places across the country today under Namami Gange.

Afghanistan Situation Will Have Greatest Impact On Countries Like India: PM Modi