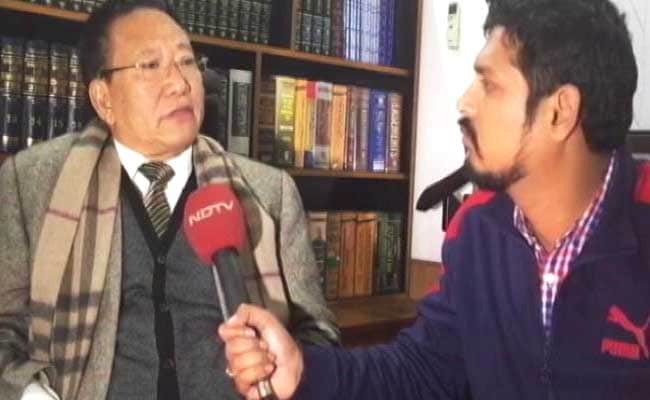 A firm T R Zeliang refused to budge an inch on the issue of stepping down. (File photo)

Kohima: Ruling Naga People's Front (NPF) chief Shurhozelie Liezietsu will wrest control of the state from Chief Minister T.R. Zeliang with the "unanimous support" of 42 out of 49 legislators, who pitchforked him to the post of the legislature party's leader, said a prominent NPF member on Thursday.

"Majority of the NPF legislators have unanimously elected Shurhozelie as their new legislature party leader to break the deadlock between the agitating groups and the government. We have tried our best to persuade the protestors but they refused to climb down," Nagaland's lone Rajya Sabha member K.G. Kenye told reporters.

"Shurhozelie has accepted the offer of the legislators to head the NPF-led Democratic Alliance of Nagaland (DAN) government and restore normalcy, preventing the imposition of President's rule in the state," Mr Kenye said.

Without wasting much time, Governor P.B. Acharya and Mr Zeliang left for New Delhi on Thursday afternoon from Dimapur.

Mr Zeliang is expected to take up the matter with Prime Minister Narendra Modi and Union Home Minister Rajnath Singh.

Tribal groups, under the aegis of Nagaland Tribes Action Committee (NTAC) and Joint Coordination Committee (JCC), have been pressing for Mr Zeliang's resignation over his decision to conduct the municipal elections with 33 per cent of seats reserved for women.

The agitators went to the extent of serving an ultimatum to the Chief Minister on Wednesday to resign within three days or face further protests. Their   three-day ultimatum will end on February 17. The groups have decided to take to the streets on Friday at Kohima to mount pressure on Mr Zeliang to step down.

"Had the Governor and the Chief Minister not left Kohima (state capital), Shurhozelie along with the legislators would have driven down to Raj Bhavan to stake claim and form the new government," Mr Kenye said.

He said Mr Zeliang and the Governor were expected to return to Kohima on Friday to pave way for the formation of the new government.

"We are sure that there will be smooth transition of power as the Chief Minister himself wants to ensure peace in the state after weeks of agitation," he added.

All efforts to contact Mr Zeliang drew little blank, as he did not answer all phone call.

Nagaland has been on turmoil from January, after the NPF-led government decided to hold local body elections in 12 towns across the state.

The government later declared the civic elections as "null" and "void".

Three persons were killed and many injured following clashes between the police and public, who were opposing the civic polls.

In fact, NPF legislator Neiphrezo Keditsu had resigned as Chairman of Nagaland State Mineral Development Corporation Limited on moral grounds as one of the persons killed in the Dimapur police firing was from his village.

The tribal groups-sponsored indefinite shutdown entered its fourth day on Thursday, paralysing Kohima. A firm T R Zeliang refused to budge an inch on the issue of stepping down.

Promoted
Listen to the latest songs, only on JioSaavn.com
The state secretariat, state and central government offices, banks, shops and other businesses remained closed.

National Highway-2, which connects the main commercial town of Dimapur with the poll-bound state of Manipur, was also affected.