The Home Ministry's clarification came amid unverified reports that the two sides have concluded peace talks, breaking a deadlock over a separate Naga flag and constitution. 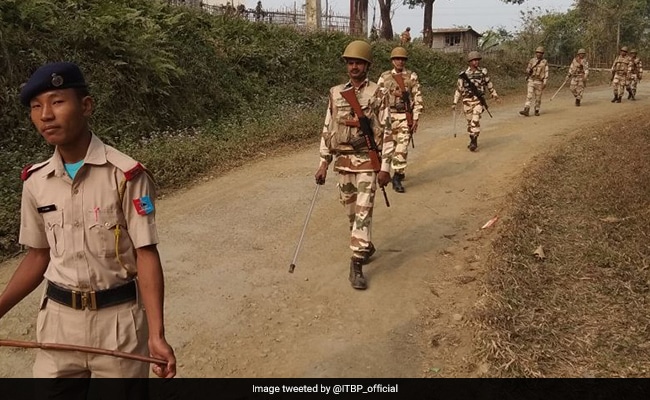 Police presence has been strengthened in Manipur in view of the "rumours". (Representational)

The centre on Thursday rejected reports that it has arrived at a final settlement with rebel group NSCN(IM) in the 22-year-old Naga peace talks, clarifying that such a deal will be struck only after taking all stakeholders into consideration.

"It has come to notice of the government that rumours are being spread in the media that the final Naga settlement has been arrived at, and will be announced soon. This is creating anxiety and concern in some parts of the country," the Ministry of Home Affairs said in a press statement, adding that no settlement will be signed without consulting other northeastern states such as Assam, Manipur and Arunachal Pradesh.

The clarification came amid unverified reports that the two sides have concluded peace talks, breaking a deadlock over a separate Naga flag and constitution. The "rumours" were further strengthened when Nagaland Chief Minister Neiphiu Rio extended congratulatory messages over the social media. "We extend our deepest appreciation to the negotiating parties of the peace talks for making the historic breakthrough," he tweeted, thanking Prime Minister Narendra Modi and Home Minister Amit Shah for displaying "political will and concern" for the Naga people.

The reports created a flutter in neighbouring Manipur, where protesters claim that a peace settlement between the centre and Naga rebels may harm its territorial integrity. Nagas dominate the hill areas of Manipur.

Manipur Chief Minister N Biren Singh sought to allay their fears through a Facebook post. "The Union Home Minister has categorically said that no decision will be taken without consulting Arunachal Pradesh, Assam and Manipur. So, as your chief minister, I want to tell you that the word given by the Union Minister carries weight. I believe him, and so should you," his message read.

The NSCN(IM) is firm on its demand for a separate Naga flag and constitution, but seven other rebel Naga groups - jointly referred to as the Naga National Political Groups or NNPG - had already expressed their willingness to sign the final peace agreement while keeping a window open for future political discourse on the contentious issues.

A press statement by the NNPG "appreciating the understanding reached between the government and the NSCN(IM)" later added to the confusion. The conglomerate of Naga groups also asserted that the Naga flag was a political symbol that cannot be confined to socio-cultural activities, as demanded by the central government. "The flag, since the dawn of Naga political consciousness, has been an expression of our political identity and aspirations," it said, adding that "Nagas will continue to pursue it in one voice politically and democratically".

The official deadline set for the talks was set to expire on Thursday.