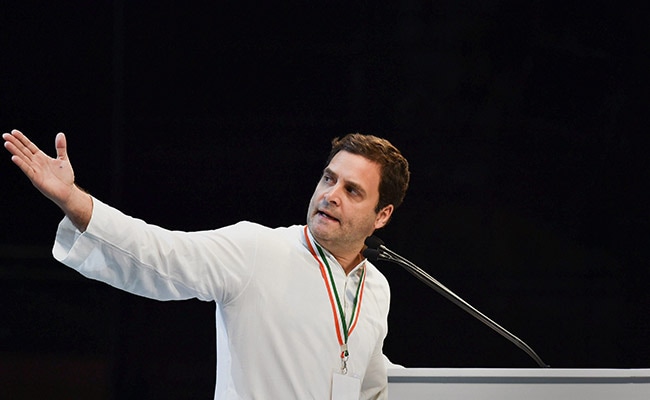 Rahul Gandhi has claimed that the Narendra Modi app gives data to US firms.

New Delhi: A fresh war of words erupted between the Congress and the BJP today over the Narendra Modi app, in the backdrop of the Facebook data misuse by disgraced British firm Cambridge Analytica. Congress chief Rahul Gandhi mocked the Prime Minister on Twitter, claiming the Narendra Modi app was collecting data for illegal purposes.

Hi! My name is Narendra Modi. I am India's Prime Minister. When you sign up for my official App, I give all your data to my friends in American companies.

Ps. Thanks mainstream media, you're doing a great job of burying this critical story, as always.https://t.co/IZYzkuH1ZH

The app has been in news recently after the National Cadet Corps asked nearly 13 lakh cadets to install the app ahead of a planned interaction with the Prime Minister. On Friday, #DeleteNamoApp was one of Twitter's top trends.

The Congress has been highlighting the allegations of a French cyber security expert regarding data safety in the Narendra Modi App. Yesterday, senior party leader Randeep Surjewala tweeted:

IT Minister will not do a press conference on the NaMo App on these allegations of Data Chori!

Will the media dare to question Modi ji on the functioning of his App? Will the brain behind this "Data Usurpation" be summoned?

What about the 15 Lakh NCC cadets & their privacy? https://t.co/unLi2Sj2AW

The BJP responded with a series of nine tweets, claiming the Congress efforts to discredit the app has only increased its popularity.

We all know that Rahul Gandhi is no match for Narendra Modi. But seeing his fright about the Namo App, is very amusing. When his bots tried to trend #DeleteNamoApp day before yesterday, the popularity and downloads of Namo App only increased. Today, it will be no different! pic.twitter.com/Wnan0IQFIV

The app, the party claimed was one-of-its kind, which offers users a "guest mode" that does not require any permission or data.

Rejecting the allegations, BJP sources said the data exposed by the French Twitter user is the "data entered by the user on his own device. This is not a security breach. The person does not have access to any data apart from his own data."

The Congress and the BJP has been engaged in a bitter war of words since the news of Facebook data breach became public last week.

Promoted
Listen to the latest songs, only on JioSaavn.com
The BJP claimed Facebook data has been misused not just in the US elections in favour of Donald Trump, but also by the Congress in last year's assembly elections in Gujarat. Union law minister Ravi Shankar Prasad said the Congress also planned to use it to boost the image of its chief Rahul Gandhi, and for the 2019 general elections.

The Congress accused the BJP and its ally JD(U) of getting help from disgraced British data research firm Cambridge Analytica to win elections in 2010 and 2014.
Comments
Rahul GandhiNarendra Modi