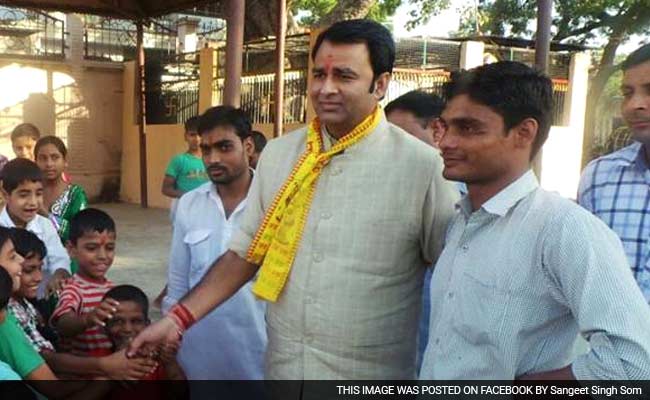 According to prosecution, BJP leader Sangeet Som and other six accused are facing charges under various sections of IPC for violating prohibitory orders.

Muzaffarnagar, Uttar Pradesh: BJP legislator Sangeet Som today surrendered before a local court after a bailable warrant was issued against him in connection with a 2013 Muzaffarnagar riots case in Uttar Pradesh.

Additional Chief Judicial Magistrate Sitaram granted him bail after he submitted a personal bond of Rs 20,000 and gave an undertaking that he will appear in court for the next hearing.

The next date of hearing in the case has been fixed on January 23.

In December last year, Union minister Sanjeev Baliyan, BJP legislator Suresh Rana, BJP lawmaker Bhartendu Singh and four others had surrendered in a court in connection with the case.

According to prosecution, Mr Som and other six accused are facing charges under various sections of Indian Penal Code for violating prohibitory orders, deterring public servants from discharging their duties and also wrongful restraint.

It is alleged that the accused participated in Nadala Mador mahapanchayat meeting and incited violence through their speeches in the last week of August of 2013.

The communal clashes in Muzaffarnagar and adjoining areas in August and September of 2013 had claimed 60 lives and displaced over 40,000 people.