Navjot Sidhu's participation in the ceremony had been in doubt after he was denied political clearance despite having been invited by Pakistan Prime Minister Imran Khan, who was his contemporary on the cricket field in the 1980s 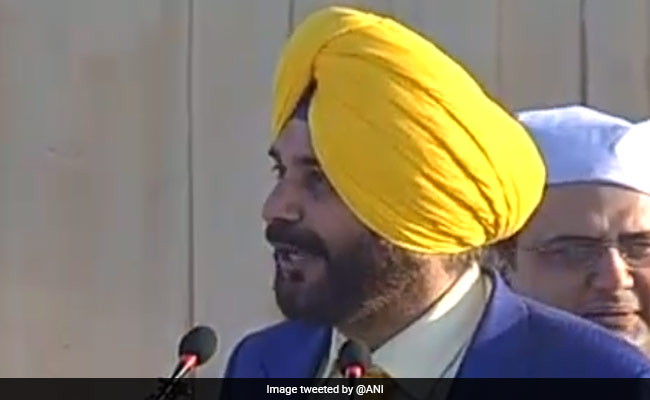 Cricketer-turned-politician Navjot Singh Sidhu, known for his colourful phrases, told Prime Minister Narendra Modi he was sending a "Munnabhai MBBS-style hug" as thanks for establishing the Kartarpur Corridor project and helping Sikhs access the Darbar Sahib. "I am thanking Modiji... it doesn't matter if we have political differences... doesn't matter if my life is dedicated to Gandhi family... I am sending a Munnabhai MBBS-style hug to you, Modi saheb, for this," Mr Sidhu said.

Speaking at an event on the Pakistan-side of the border, the Congress MLA also thanked Pakistan Prime Minister Imran Khan, calling him the "king of hearts" and saying, "Sikandar (Alexander) won the world with fear but you won hearts all over the world."

"Both sides of Punjab witnessed bloodbath during the partition. You (Mr Khan) and Mr Modi have applied ointment on the wounds of the people (through this initiative)," he said.

Navjot Singh Sidhu at inaugural ceremony of #KartarpurCorridor in Pakistan: I am thanking Modi ji also, it doesn't matter if we have political differences,doesn't matter if my life is dedicated to Gandhi family, I am sending a Munnabhai MBBS style hug to you Modi sahab for this https://t.co/VqQQduVFaLpic.twitter.com/3Rz0lUf2rW

Mr Sidhu's effusive praise comes in the middle of a long-running feud with Punjab Chief Minister Captain Amarinder Singh, who was also part of the delegation that travelled to Kartarpur today.

The feud has escalated steadily since the end of Lok Sabha polls in May, when Mr Sidhu sulked after being stripped of cabinet positions in the Punjab government and then resigned from his position.

Rifts between Mr Sidhu and the Punjab Chief Minister appeared to widen earlier this week after posters declaring the former cricketer and the Pakistan Prime Minister as the "real heroes" behind the Kartarpur Corridor project surfaced in Amritsar in Punjab.

The Chief Minister would only say that it was up to Mr Sidhu to explain the posters.

Mr Sidhu's participation in the ceremony had initially been in doubt. He had been extended an invitation by Prime Minister Khan, who was his contemporary on the cricket field in the 1980s. However, the centre mandated that all such invitations must secure political clearance.

Mr Sidhu sought permission on three occasions; the third was sent earlier this week. Clearance was only given on Thursday, 48 hours before the inauguration ceremony.

The 4.5 km-long Kartarpur Corridor connects the Dera Baba Nanak shrine in Punjab's Gurdaspur with the Darbar Sahib in Kartarpur in Pakistan's Punjab province. Located about four kilometres from the International Border, the Darbar Sahib is believed to be where Guru Nanak Dev, the founder of Sikhism, spent the last 18 years of his life.

Other high-profile people who travelled to Kartapur in the first batch of pilgrims are former Prime Minister Manmohan Singh and Punjab Chief Minister Amarinder Singh. BJP MLA Sunny Deol and Union Ministers Hardeep Puri and Harsimrat Kaur Badal are also in the group.