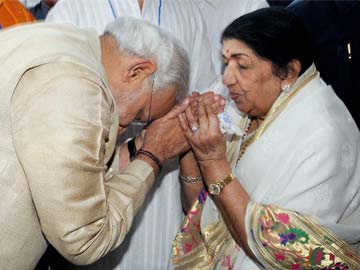 "Lata Mangeshkar's Bharat Ratna should be taken away as she has endorsed Narendra Modi. We should take back the Padma awards of all those who support Narendra Modi," Mr Chandurkar said, without naming any Padma awardee.

"Narendrabhai is like my brother. All of us want to see him become the Prime Minister. On the auspicious occasion of Diwali, I hope our wishes would come true," Ms Mangeshkar had said earlier this month at a function in Pune after the BJP's prime ministerial candidate inaugurated a hospital named after the singer's father, Deenanath Mangeshkar. (Read)

The 84-year-old singer was awarded the Bharat Ratna in 2001.

The BJP has reacted strongly to Mr Chandurkar's statement. "Do Sonia Gandhi and Rahul Gandhi endorse this demand? If Chandurkar's demand is genuine, then why is the Congress asking Sachin Tendulkar to campaign for their party. This shows the Congress's double standards," Maharashtra BJP president Devendra Fadnavis told NDTV.

Promoted
Listen to the latest songs, only on JioSaavn.com
In July this year, the BJP's Rajya Sabha MP Chandan Mitra had demanded that Nobel laureate Amartya Sen be stripped of his Bharat Ratna for saying that he would not like to see Mr Modi as the country's next Prime Minister. (Read)

The Congress had shot back, asking the BJP to explain if it thought the Bharat Ratna was like a "ceiling fan that comes with a seven-year warranty."