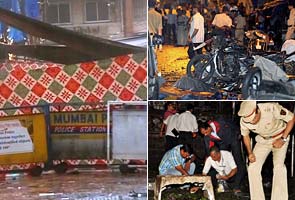 Mumbai: A hazy picture is gradually emerging of how the blasts took place - sophisticated Improvised Explosive Devices (IEDs) were used; they were triggered by alarms set on cellphones. No sim cards have been found at the locations of the blasts.  Two of the bombs used over a kilo of explosives.

"Preliminary investigations indicate the use of IEDs with ammonium nitrate-based explosives. The IEDs are not crude. They indicate some level of sophistication," Union Home Secretary RK Singh told reporters on Thursday, a day after triple blasts in Mumbai left 17 people dead, 131 injured and a severed head to be identified.

Mr Singh also confirmed that a dead body at JJ Hospital in Mumbai had been found with an electrical circuit on it. When asked if the gadget could have been a timer used to trigger one of the explosions, he said that it was safest for now to assume that the person who died was standing close to where an explosion took place.

UK Bansal, Special Secretary for Internal Security said there were no leads yet against any terror group.

Meanwhile, Mumbai Police now say the CCTV footage from Dadar and Zaveri Bazaar blasts sites has yielded little. They now hope to find some vital clues in the footage from a building near the Opera House, the third blast site.

Investigations are being carried out by the Maharashtra Anti-Terrorist Squad (ATS) and the Mumbai Police (Crime Branch),  assisted by teams from the National Investigating Agency (NIA), the National Security Guard (NSG) and Central Forensic Science Laboratory (CFSL). The NIA Director General is in Mumbai to oversee the probe.

The union Home Ministry has been updating the media regularly about post-blast investigations.

Home Minister P Chidambaram, who is in Mumbai, refused to speculate on who is responsible for the attacks. He said no group has so far claimed responsibility. He added that all groups "hostile to India" were being probed. "We have asked the police and investigators not to proceed on presupposition. All those who have the capacity to carry out terror attacks are suspected. All angles will be investigated, all premises will be examined, all leads will be followed," Mr Chidambaram said.

Promoted
Listen to the latest songs, only on JioSaavn.com
(Watch: Live video of our complete coverage)