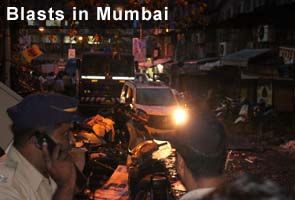 Mumbai: Two more victims of the July 13 serial blasts in Mumbai, who had been admitted to the J J hospital, succumbed to their injuries today, taking the death toll in the terror attack to 23.

Another victim Ajay Verma (30), who also suffered deep burn injuries and a head injury at the Zaveri Bazaar blast, died this evening while undergoing treatment, the sources added.

Twenty-two others are undergoing treatment in J J Hospital, including six still in a critical condition, sources said.

Promoted
Listen to the latest songs, only on JioSaavn.com
Of the 12 injured persons admitted to Harkisandas hospital, five are still in critical condition, sources said.

A total of 131 persons were injured in the blasts while 23 have lost their lives till now.