The partnership with the country's biggest wireless carrier by subscribers gives Facebook a boost in its top global market, one that is rapidly embracing online payment and e-commerce as more Indians get smartphones. 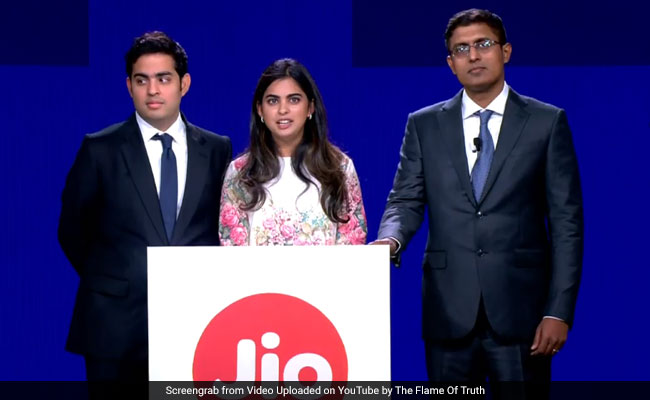 The tie-up with Facebook gives a Silicon Valley stamp to Mukesh Ambani's ambitions.

With the pandemic battering assets and oil nosediving, tycoon Mukesh Ambani needed a win to stem the investor exodus from Reliance Industries Ltd., the energy conglomerate he's been trying to reinvent.

This week, Facebook Inc. and its Chief Executive Officer Mark Zuckerberg delivered just that. The US social-media giant said it will buy about 10% of Reliance's digital assets for $5.7 billion -- its biggest purchase since acquiring WhatsApp six years ago. The deal will create a formidable e-commerce force to take on Amazon.com Inc. and Walmart Inc. in India, one of the world's most competitive internet arenas.

Months in the making, the all-cash deal involved talks since at least mid last year between trusted lieutenants of Mr Zuckerberg and Mr Ambani -- including the billionaire's elder son Akash -- according to people familiar with the matter. Morgan Stanley led the negotiations and Akash's twin sister, Isha, was also involved in the talks, two of the people said.

With the Covid-19 health crisis and travel curbs stymying progress on an agreement, the dealmakers recently turned to video conferences and phone calls to fast-track the talks, the people said, asking not to be identified as the information is confidential.

For Mr Ambani, 63, the deal -- which pairs WhatsApp's payment platform with his e-commerce startup JioMart -- was timely. In August, he promised shareholders that he'd cut the group's $20 billion of net debt to zero by disposing of parts of some business divisions. It also came as a push to sell a $15 billion stake in Reliance Industries' refining and chemicals unit to Saudi Arabian Oil Co. was showing signs of sputtering.

Big Good News
"Given the collapse in oil prices and the delay in Aramco deal, they needed good news fast and this one is a big good news in the current environment," said Rajnesh Jain, director of KJMC Capital Market Services Pvt., a Mumbai-based brokerage.

Reliance Industries' market value surged about $11 billion on the deal, which has been rumored for some months. It saw Ambani regain the title of Asia's richest man from Alibaba Group Holding Ltd.'s co-founder Jack Ma after the market rout sparked by the pandemic wiped out about $30 billion from his wealth between December 19 and March 23.

The Aramco transaction was key to Mr Ambani's goal of erasing net debt by March 2021. It was supposed to be wrapped up last month before regulatory approvals, but with the crash in crude oil, the fate of the talks is now uncertain. That delay added to the pressure to rush the Facebook deal through, one of the people said.

The tie-up gives a Silicon Valley stamp to Mr Ambani's ambitions, which have seen him dive first into telecommunications and then e-commerce since taking over what was essentially an oil-refining and petrochemicals company after the death of his father Dhirajlal Hirachand Ambani in 2002.

The partnership with the country's biggest wireless carrier by subscribers gives Facebook a boost in its top global market, one that is rapidly embracing online payment and e-commerce as more Indians get smartphones. For a company that has faced regulatory scrutiny in the country over fake news and privacy concerns, the tie-up with a well-connected ally may also help cement its position. It ran into opposition in 2019 while trying to launch a payments feature inside WhatsApp.

The involvement of Mr Ambani's children in such an important deal also talks to his desire to have them more engaged in his $114 billion empire. The tycoon has credited his twins, 29, with helping nudge him into the internet and newer businesses, which he has predicted will contribute almost as much as Reliance Industries' energy units in a few years. Mr Ambani also has a younger son, Anant, 25.

Under the agreement, Facebook's WhatsApp will help almost 30 million mom-and-pop stores -- the backbone of the country's retail industry -- to process digital payments, Mr Ambani said. Through this, the tycoon gains a payment platform for his e-commerce unit and startup, JioMart, while Facebook gets a testing ground for its payment services -- currently in pilot -- in a market with a population of 1.3 billion people.

Facebook has had a relationship with Reliance Jio Infocomm Ltd., Ambani's wireless carrier, for a couple of years since Akash proposed the idea of incorporating a "lite" version of WhatsApp on the operator's phones. Jio Infocomm now has almost 400 million subscribers, about the same number of WhatsApp users as there is in the country.

Talks between the two parties intensified in October, when Reliance Industries formed a holding company for its digital services, one of the people said. The new entity was named Jio Platforms in November and is loosely modeled after companies like Alibaba. It encompasses Jio's digital apps, ecosystems and the wireless network.

In January, Facebook executives and its bankers visited India to conduct due diligence on Jio, and once the travel restrictions set in, the talks were done remotely, another person said.

The Facebook deal is a "great catch for Reliance Industries that has been struggling with delays in its deleveraging exercise," said Abhimanyu Sofat, head of research at IIFL Securities Ltd. in Mumbai. "It will have to pursue further opportunities, including Aramco, at the earliest" to cut its net debt to zero, he said. 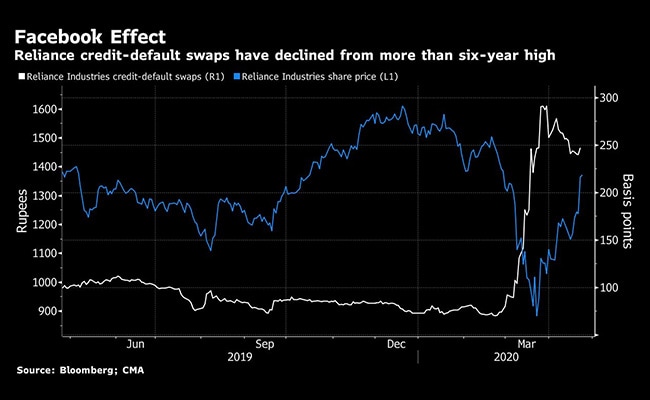 Debt investors have reacted positively so far. After climbing to a more than six-year high of 291 basis points on March 26 on concerns over the company's ability to rein in the liabilities, the cost to insure Reliance Industries' bonds against default has fallen 44 basis points, according to data compiled by Bloomberg.

Most of the cash raised from the stake sale to Facebook will be used to pay the group's debt, while the rest will be used to fuel growth at its digital platforms, the people said.

Reliance Industries has spent almost $50 billion -- most of it borrowings -- to build Reliance Jio Infocomm, which became India's No. 1 wireless carrier within about three years of its debut by offering free calls and cheap data. The tycoon has also been building the retail side of his business, acquiring British toy-store chain Hamleys last year.

"This will ease the market fear of a debt hangover," said Nirmal Gangwal, founder and chairman of Brescon & Allied Partners LLP, a Mumbai-based debt restructuring advisory. "This will give some respite from the potential delay in the Aramco deal."

And Facebook may only be the first investor, said Mr Gangwal. Last year, Mr Ambani said he would raise funds by bringing "leading global partners" into his technology and retail businesses, and eventually through initial public offerings.

"This is a benchmark valuation for Reliance Jio as the first anchor investor and will now set the stage for more rounds of investment either through IPOs" or more investors, Mr Gangwal said.