More than 60 per cent milk in country unsafe, adulterated with paint, detergent: Government 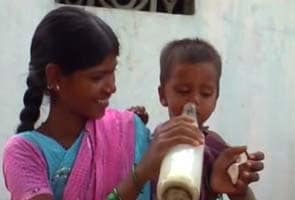 New Delhi: Over 68 per cent of milk in the country does not conform to the standards set by the Food Safety and Standards Authority of India (FSSAI), the Centre has told the Supreme Court on a plea for checking sale of synthetic and adulterated milk and various dairy products.

The submission has been made by the Centre in its affidavit which referred to a survey conducted by the FSSAI, which had found that over 68 per cent of the "non-conforming" milk was found in urban areas, 66 per cent of which was loose milk.

According to the FSSAI's 2011 survey, the most common adulterant was found to be the addition of water, and the main reason for deviation from the standards was addition of glucose and skimmed milk powder. It also found that in some samples, detergent was mixed.

The affidavit was filed in response to the notice issued on a Public Interest Litigation (PIL) by a group of citizens, led by Swami Achyutanand Tirth of Uttarakhand, seeking a check on sale of synthetic and adulterated milk and various dairy products.

Notices had also been issued to Haryana, Rajasthan, Uttar Pradesh, Uttarakhand and Delhi governments on a PIL alleging that synthetic and adulterated milk and milk products are prepared using urea, detergent, refined oil, caustic soda and white paint which, according to studies, are "very hazardous" to human life and can cause serious diseases like cancer.

The petitioners' advocate Anurag Tomar said that the affidavit is silent on many aspects which allegedly refer to adulteration of milk and its products.

The affidavit said that over 83 per cent of the non-conforming milk in rural areas was found to be loose milk.


The FSSAI had analysed 1791 samples of milk randomly collected from 33 states and Union territories to identify the common adulterant in milk, both loose and packaged.

It had gathered samples from rural and urban areas and after analysing them at five different public sector laboratories, it had found that 68.4 per cent of the samples were non-conforming (adulterated) to its standards.

The PIL said that the alarming situation and imminent danger to public health requires immediate action on the part of the central government and the state governments to ensure supply of healthy, hygienic and natural milk to the citizens of India.