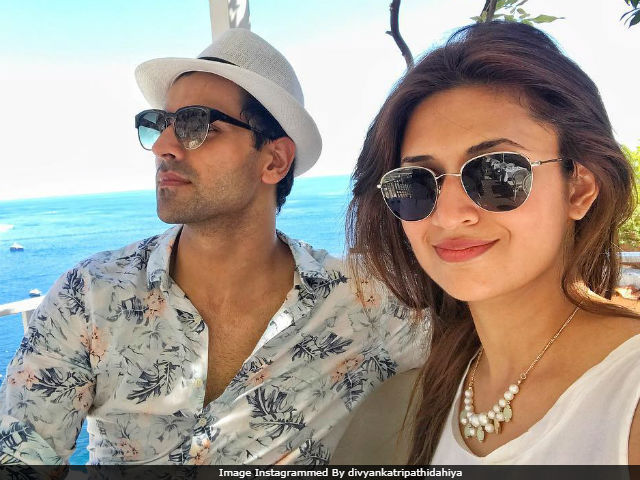 New Delhi: Television's star couple Divyanka Tripathi and Vivek Dahiya are in Europe to celebrate their first anniversary. The couple, who married last year on July 8, flew out of Mumbai earlier last week. Divyanka and Vivek are constantly keeping fans updated with their pictures from the anniversary-special Europe trip. The actors are currently in Italy. "Because 'share and care' is better than give and take. Happy 1st year of this wonderful adventure love," reads the latest post on Vivek's Instagram account. Divyanka and Vivek, co-stars of television show Yeh Hai Mohabbatein, married in Bhopal. Apart from the anniversary, the couple has one major reason to celebrate - their victory in the dance reality show Nach Baliye 8.

Divyanka and Vivek are 'travelling like never before' and these pictures are a proof.

Because 'share and care' is better than give and take. Happy 1st year of this wonderful adventure love!

Sometimes it's better to be lost than to be found

It's impossible not to be in love here... #AmalfiCoastExperience

A post shared by Divyanka Tripathi Dahiya (@divyankatripathidahiya) on Jul 14, 2017 at 12:26am PDT

Local specialities add character to your holiday.. #LemonSorbetto brightening up our day!

A post shared by Divyanka Tripathi Dahiya (@divyankatripathidahiya) on Jul 11, 2017 at 1:06pm PDT

A post shared by Divyanka Tripathi Dahiya (@divyankatripathidahiya) on Jul 12, 2017 at 2:15am PDT

Meanwhile, Divyanka won the best actress award for Yeh Hai Mohabbatein. A 'proud husband' Vivek posted a picture of himself with Divyanka. "June ended on a high and July's began quite well! #ProudHusband," he captioned his post.

June ended on a high and July's began quite well! #ProudHusband Styled by: @victorrobinson9083

Divyanka Tripathi and Vivek Dahiya fell in love on the sets of Yeh Hai Mohabbatein, headlined by the actress. Vivek has also been a part of Ekta Kapoor's Kavach...Kaali Shaktiyon Se, which went off air last year.

Soon after their wedding, Divyanka and Vivek went to Udaipur for a short trip. They celebrated the New Year's in Europe and their first Valentine's Day in Goa. Vivek has earlier expressed that since Divyanka has been working continuously hence, he wants to take her a break and this Europe trip was reportedly a surprise for Divyanka.
Comments
Divyanka TripathiVivek Dahiyadivyanka vivek