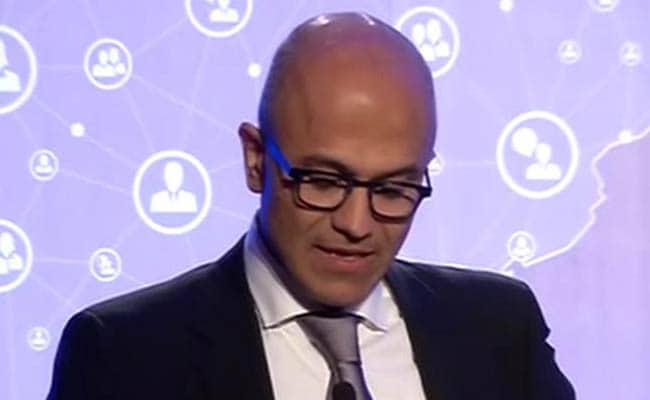 Speaking at a dinner hosted in San Jose in the honour of visiting Prime Minister Narendra Modi, Mr Nadella said that Microsoft wants to make things and make things happen.

Speaking at a dinner hosted in San Jose in the honour of visiting Prime Minister Narendra Modi, Mr Nadella said that Microsoft wants to make things and make things happen.

In his remarks, Me Nadella said Microsoft's plan is to partner with the Indian Government to bring in low-cost broadband connectivity to 500,000 villages in India.

"We believe that low-cost broadband connectivity coupled with the scale of cloud computing intelligence that can be harnessed from data can help drive creativity, efficiency and productivity across governments and businesses of all sizes," the first Indian-American Microsoft CEO said.

This in turn, he argued, would drive more affordable products and services and access to opportunity to all of India.

To that end, next week Microsoft would announce availability of its cloud services operating out of India's data centers. "This is a big milestone," he said.

"A key part of both Make in India and Digital India, bringing world class infrastructure into India, respecting India's digital security, sovereignty and privacy is a key milestone for us," Mr Nadella said.

Meanwhile speaking to a news channel, Mr Nadella said that India is in a great spot with "world class entrepreneurs and human capital".

India can "leapfrog" in the technology infrastructure space to drive the next level of productivity, efficiency and creativity for Indian government, businesses and consumers, he said.

"Narendra Modi's vision is absolutely right and I think he is pushing the right agenda," he added.

Citing an example, Nadella said Microsoft is working with the Andhra Pradesh government to take the enrolment data of schools and using machine learning to understand which students and schools have higher dropout rates.

Asked if he was worried about the regulatory hassles that often trouble multinational firms, Mr Nadella said the company has been present in India for over 20 years.

"We are committed to the long term. We understand the legitimate rights of each country, when it's come to digital security and that is one of the fundamental reason why we invested in cloud in India," he said.