Tejashwi Yadav, along with his mother, Rabri Devi and sister Hema Yadav, was interrogated in Patna for seven hours on August 29. He is named in a series of corruption scandals along with his siblings and father, regional powerhouse Lalu Yadav. 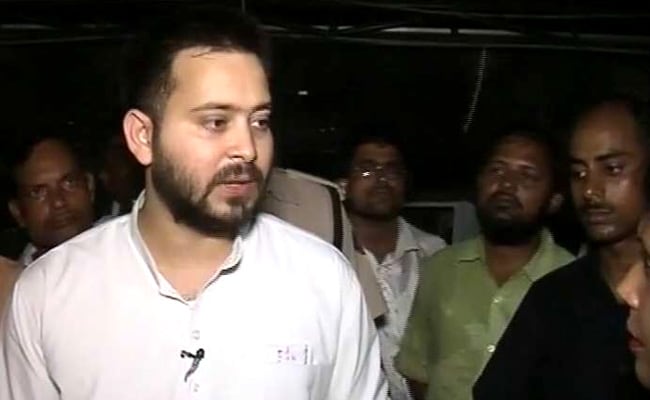 Tejashwi Yadav was asked 36 questions by investigators in connection with corruption scandals.

Patna: It wasn't exactly "Bond, James Bond." When seated across the table from four investigators, the 28-year-old who brought down the Bihar government in July said, "Mera naam Tejashwi Yadav hai, main ninth pass hoon" (I am Tejashwi Yadav, schooled till Class 9).

Tejashwi Yadav, along with his mother, Rabri Devi and sister Hema Yadav, was interrogated in Patna for seven hours on August 29. He is named in a series of corruption scandals along with his siblings and father, regional powerhouse Lalu Yadav.

In 2015, he was made Deputy Chief Minister of Bihar, with Nitish Kumar as his boss. He owed his rank to his father's party winning the most seats in the state election which were fought in alliance with Nitish Kumar and the Congress. For the next two years, Tejashwi Yadav did not endeavor to shake off the image of a privileged son cruising through the government, enjoying the perks of being No 2 in the government but defaulting on basic duties like showing up for crucial sessions of the legislature or important public events which were headlined by the Chief Minister.

While Nitish Kumar tolerated this behavior, accepting it as the price of being propped up in power by Lalu Yadav, a corruption scandal that broke in April turned into a windfall for him. The CBI alleged that while he was Railways Minister in the previous Congress-led government, Lalu Yadav assigned the running of railways hotels in Bihar to private firms whose kickbacks traveled through a maze of front companies to end in a series of posh homes and commercial real estate owned by Lalu Yadav's children.

For seven hours, Tejashwi Yadav was asked 36 questions by investigators to explain how he became a director in some of those companies ,which entitled him to own, among other property, a large house in one of Delhi's fanciest neighbourhoods. The plot has been seized by the Income Tax department.

Tejashwi Yadav and his family have denied any wrongdoing; they say the expanding list of cases against them is evidence that Prime Minister Narendra Modi employs investigative agencies to persecute political opponents who stand up to him.

Tejashwi Yadav became the owner of the Delhi mansion in 2011. But he did not disclose this when he listed his assets, as required, for the election that he contested in 2015. Investigators say that though he resigned as a director of the firm that owned the property before the election, he continued to sign cheques issued by the firm, which proves that he was still running it and a proxy owner of the property, worth about 40 crores.

He is accused of similar wrongdoing in owning a three-acre plot in Patna where Bihar's largest mall was being constructed till earlier this year when the centre stopped the development, claiming that environmental permissions were missing for the project.

By early July, Nitish Kumar made it clear that with Tejashwi Yadav named for corruption in the railways hotel case, the Yadavs were unacceptable allies. Tejashwi Yadav countered that when the alleged swindle took place, he was barely a teen, "still too young to have a moustache." Unmoved, Nitish Kumar lined up the BJP as a new ally and nullified the government he ran with Lalu Yadav and the Congress. Days later, he became the head of a new government composed of his party and the BJP.

Promoted
Listen to the latest songs, only on JioSaavn.com
The Yadavs have pilloried him as an opportunist and Tejashwi Yadav undertook a state-wide tour to offer his defence to the public, though the event was also meant to cement his position as his father's political heir.

Last week, he wrote to the Chief Minister, requesting permission to remain in the government-owned house that he lived in as Deputy Chief Minister. Not possible, he was told. He has been given a month to move out.