The highest turnout was recorded at Mookaiaw constituency where 93.21 per cent voters exercised their franchise, and the least was registered in North Shillong which witnessed 60.79 per cent polling. 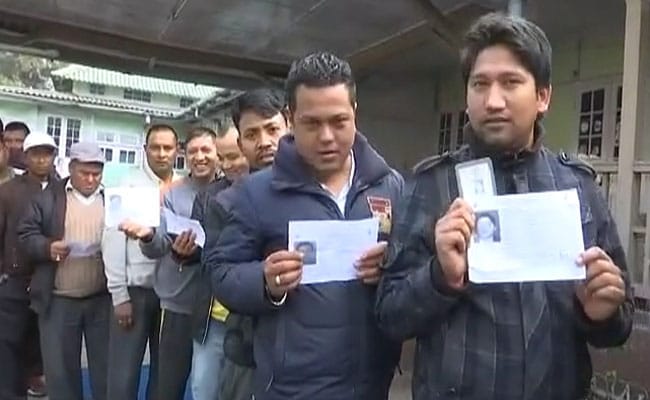 On Tuesday, the turnout was put at around 75 per cent.

In 2013 Assembly elections in the state, the voter turnout was 86.82 per cent. This year's polling percentage is expected to go up further after voting in Williamnagar constituency, he said.

Polling in Williamnagar was countermanded after the death of NCP candidate Jonathone N Sangma in a militant attack last week.

''Taking into account postal ballots of over 22,000 government employees who were deployed on election duty, the total voting percentage will touch the 2013 figures and may even go up a bit considering the fact that Williamnagar has a trend of high voter turnout,'' Mr Kharkongor said.

On Tuesday, he had put the turnout at around 75 per cent, but polling data from far flung areas of the state was yet to be received.

Mr Kharkongor said on Tuesday 15,35,846 voters out of the total 18.09 lakh electorate exercised their franchise in 59 constituencies.

The Election Commission has ordered re-polling in Kyndong Tuber polling station in Raliang constituency of West Jaintia Hills district tomorrow. Voting will be held from 7 am to 4 pm, he said.

The highest turnout was recorded at Mookaiaw constituency where 93.21 per cent voters exercised their franchise, and the least was registered in North Shillong which witnessed 60.79 per cent polling, he said.

Promoted
Listen to the latest songs, only on JioSaavn.com
Mr Kharkongor said the state election department has retained 11 of the 106 companies of central armed police forces which were deployed for peaceful polling.

''After a review of the law-and-order situation we have recommended retention of 11 companies of CAPF which will be deployed at the strong room in East Jaintia Hills district and in few pockets of the state capital," he said.
Comments
F R KharkongorMeghalaya Assembly PollsMeghalaya