Meet Oldest Indian Voter From Himachal, Part Of Every Election Since 1951

Shyam Saran Negi has been appointed a brand ambassador by the state Election Commission for its SVEEP (Systematic Voters' Education and Electoral Participation) campaign. 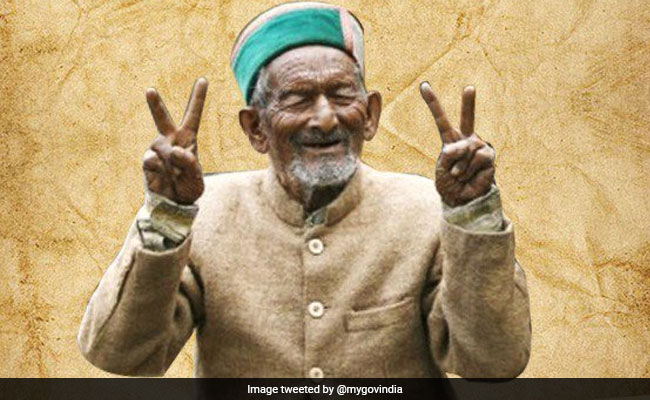 A staunch believer in democracy, he wants other Indians too not to miss the opportunity to caste their votes.

Shyam Saran Negi has been appointed a brand ambassador by the state Election Commission for its SVEEP (Systematic Voters' Education and Electoral Participation) campaign.

An appeal would be issued soon on his behalf to the people to vote for the May 19 Lok Sabha elections, Chief Electoral Officer Gopal Chand told IANS.

Shyam Saran Negi lives with his youngest son Chander Parkash in the picturesque village of Kalpa in Kinnaur district, some 275 km from the state capital.

The centenarian, who lost his wife at the age of 80 in 2014, said it is important to vote.

"I am appealing to all the voters, especially the younger generation, to spare time and elect an honest man who can take the country to new heights," Shyam Saran Negi told IANS.

Shyam Saran Negi, who is hard of hearing, will turn 103 on July 1. He likes to listen to radio.

He has three sons and five daughters and has several grandchildren and great-grandchildren. He lost his eldest son in 2002.

According to Chander Parkash, his father does his routine chores on his own and has good vision.

A team of election officials called on Shyam Saran Negi last week to enquire about his well-being.

Retired as a junior basic teacher from a government school in 1975, Shyam Saran Negi was among the first to vote in independent India's first Lok Sabha battle in 1951 in Chini constituency - later renamed Kinnaur.

At that time, balloting in the snow-bound area was held ahead of other places in the state and the country.

Shyam Saran Negi has voted in every general, Assembly and panchayat elections since 1951. He pledges to vote in the 2019 Lok Sabha elections too.

"Yes, I will be among the first to cast my vote," Shyam Saran Negi said.

Kalpa village is part of the Mandi Lok Sabha constituency, which includes Kullu and Mandi and parts of Chamba and Shimla districts besides the tribal-dominated Kinnaur and Lahaul and Spiti districts.