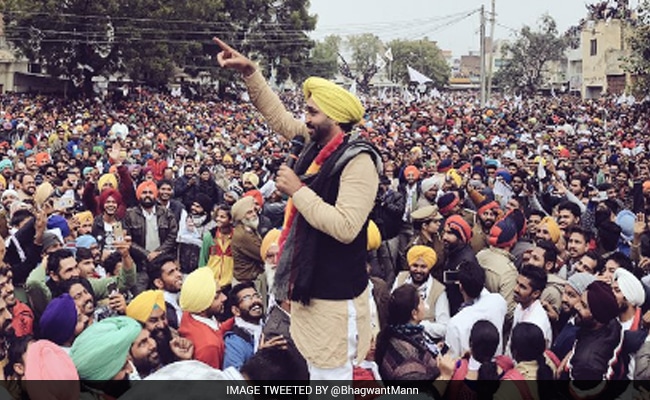 AAP MP Bhagwant Mann said the leadership should introspect on the reasons behind its defeat.

New Delhi: After another election defeat this year, Arvind Kejriwal's Aam Aadmi Party (AAP) has again blamed EVMs or Electronic Voting Machines. AAP lawmaker Bhagwant Mann, however, is not buying it and he has gone public with his savage critique of the party.

The party leadership is "behaving like a mohalla (local) cricket team," Mr Mann said on Wednesday after AAP's defeat in the Municipal Corporation of Delhi (MCD) election just two years after it won a colossal mandate to rule Delhi.

The BJP has retained the three municipal corporations with a huge majority, while AAP has emerged a distant second. Since the 2015 Delhi election, AAP's vote share has dropped by almost half from 54 per cent to around 26.

Mr Mann, a 43-year-old popular stand-up comic, was among the key players in AAP's failed campaign in Punjab, where it fell hopelessly short of expectations and lost its debut state polls last month. After winning only 20 of Punjab's 117 seats, the party raised doubts about EVMs and said they had been tampered with. It has become a recurring theme for AAP.

The lawmaker said it was useless to find fault with EVMs and the party should introspect why it lost in Punjab.

Reacting to Mr Mann's comments, top AAP leader and Deputy Chief Minister in Delhi, Manish Sisodia, said the party would introspect but it "does not mean EVMs were not tampered with".

"It is hard to believe that the BJP can win this kind of a victory when AAP has done so much. This is not a (Prime Minister Narendra) Modi wave but an EVM wave," Mr Sisodia said yesterday.

"There is no reason why people would vote for the BJP (in the MCD polls). We will analyse the reasons behind our defeat. We would have understood if there had been a difference
of two-four seats, but this kind of margin between the two parties can only happen if EVMs are rigged," Mr Sisodia said.

Promoted
Listen to the latest songs, only on JioSaavn.com
In Delhi too, some AAP leaders are questioning the leadership's stand.

"We need to see why we lost in Delhi despite winning 67 out of 70 seats in Delhi just two years ago," said an AAP minister.