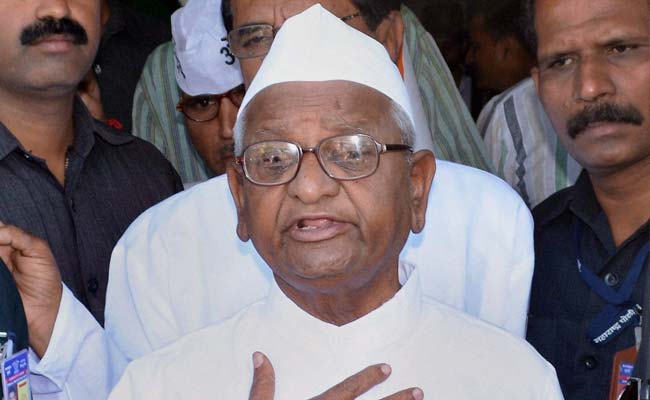 Mumbai: Social activist Anna Hazare today described the Aam Aadmi Party (AAP) as "power hungry" and said the party faced a rout in the Delhi civic polls due to loss of credibility.

The BJP swept the elections to the municipal corporation of Delhi (MCD) today winning 181 seats, while AAP finished a distant second with 48 of the 272 seats.

"When AAP came to power in Delhi, people's expectations increased and it was felt that there will be a change in the country," Mr Hazare said, speaking to reporters at his village Ralegan Siddhi in Ahmednagar district.

"However, their credibility dwindled. An important reason for this decrease was that these (AAP) leaders reneged on their poll promise of not accepting government facilities like official bungalows and other perks," he said.

"Despite the poll promise, (Kejriwal) took a big bungalow and government vehicle and even a hefty salary hike," Mr Hazare said.

Dismissing AAP's allegations of EVM manipulation, Mr Hazare said the Election Commission had asked anyone doubting the EVM machines to substantiate their claims.

"They (AAP) should have come forward to prove their charges. Now it is late," he said.

"Had (AAP rule in) Delhi become a model, the whole country would have emulated it. However, the lust for power is a bad thing," said Mr Hazare, whose anti-corruption movement led to the political rise of Mr Kejriwal and his party.

"AAP should have stayed focused on Delhi. It should not have ventured in Punjab and Uttar Pradesh. People realised that they are hungry for power," he remarked.

Promoted
Listen to the latest songs, only on JioSaavn.com
The anti-corruption crusader described the MCD poll results as "people's verdict".

"Polls are an important means to strengthen democracy. It is unfortunate that AAP didn't get success in the MCD polls," Mr Hazare said.