I Will Remain BSP President For Next 20 Years, Until I Get Old: Mayawati

Mayawati said she will continue to lead the Bahujan Samaj Party for the next 20 to 22 years, bluntly telling party leaders that nobody needed to dream of becoming the party president. 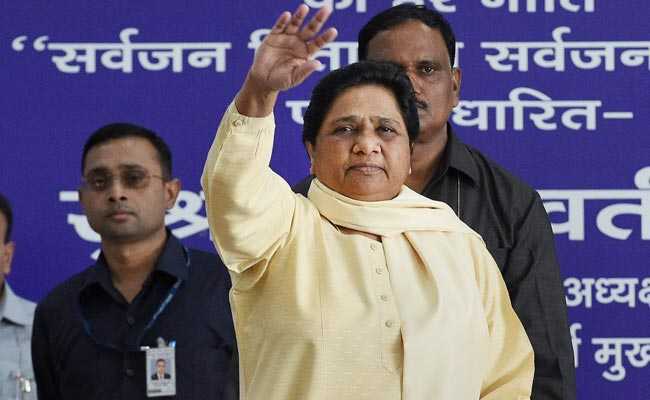 Lucknow: BSP chief Mayawati on Saturday announced changes in the party constitution, which bar her brother from continuing as its vice president while letting her remain the national president till she is too old for that responsibility. Mayawati said she will continue to lead the Bahujan Samaj Party for the next 20 to 22 years, bluntly telling party leaders that nobody needed to dream of becoming the party president. Addressing a meeting in Lucknow of party's national office bearers, she also announced major organisational changes and indicated that the BSP was willing to contest any coming election on its own if "respectable" seat-sharing arrangements could not be worked out.

Mayawati said she had made some minor changes in the BSP constitution last year to involve her younger brother into party work on the request of party leaders.

"It is unfortunate that there were reports in the media about the family being promoted in the organisation, like the Congress," she said.

"But my brother himself said he will work only as a common worker in the interest of the party," she added.

On the changes in the party constitution, she said that no close relative of the national president will hold any position in the party.

The new national president will be appointed only after the serving leader is unable to continue with field duties because of old age, she said.

Also, the new BSP national president will be appointed on the advice of the outgoing leader.

While mentioning the changes in the BSP constitution, she referred to the constitution during BSP founder Kanshi Ram's time, when relatives were not allowed party posts. This had upset some of Kanshi Ram's relatives, she recalled.

She told party leaders that though the BSP was discussing alliances with other parties for future elections, they should be prepared for any situation.

"Although talks are under way for poll alliances in Uttar Pradesh and other states, you have to remain prepared for facing any situation in your respective states at all levels," she said.

She said the stand of the party while entering into an alliance in any election has been to get a respectable share of the seats to contest. Otherwise, it sees fighting on its own as a better option, she said.

Mayawati, who was part of the show of unity among opposition parties at the swearing-in ceremony of Karnataka Chief Minister HD Kumaraswamy, said after the debacle in that state the BJP government may advance the Lok Sabha elections.

The BSP chief appointed RS Kushwaha as the Uttar Pradesh unit president in place of Ram Achal Rajbhar, who is now the BSP national general secretary and made coordinator for three states.

Two senior leaders Vir Singh and Jai Prakash Singh were made national coordinators, a first for the party.

She told party leaders to strengthen the BSP base among the 'sarv samaj' and begin focusing on Rajasthan, Chhattisgarh and Madhya Pradesh where assembly elections will be held before the 2019 Lok Sabha polls.

Promoted
Listen to the latest songs, only on JioSaavn.com
Mayawati warned them against any design to split the party vote among Dalits, Adivasi, Backwards, Muslim and other religious minorities.