After Mayawati's Big Hug Moment, A Test For Opposition Jhappi

Kairana in western UP votes for its new member of parliament on Monday; the results will be declared three days later. 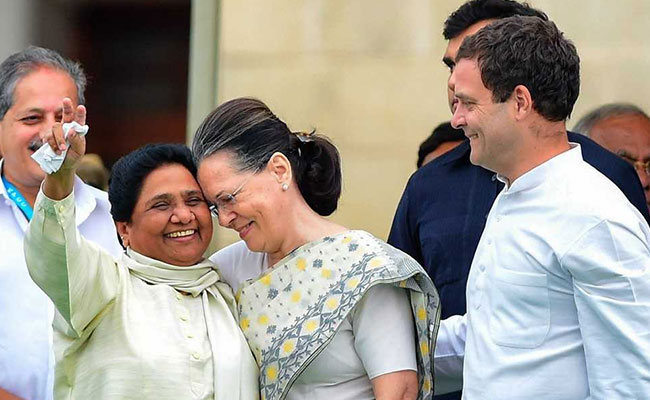 The united colours of the opposition will be tested in Kairana and Noorpur in UP.

Kairana, Uttar Pradesh: Barely a week after the show-stealing hug between Mayawati and Sonia Gandhi, the newly-born all-for-one spirit of the opposition will be tested in Uttar Pradesh, the state which decides who forms the national government.

The embrace in Karnataka, offered as nearly 23 top opposition leaders took the stage to proclaim a giant effort to block Prime Minister Narendra Modi's re-election, has already seen some follow up in Kairana in western UP, which votes for its new member of parliament on Monday; the results will be declared three days later.

On Thursday, one of two opposition candidates opted out of the by-election. That means it's a direct contest now between Mriganka Singh of the BJP, whose father Hukum Singh was the MP till he died in February, and Tabassum Hassan who belongs to the Rashtriya Lok Dal or RLD, the regional party headed by Ajit Singh, but is being backed by the Congress and the two other main players in the state, Mayawati's Bahujan Samaj Party or BSP and Akhilesh Yadav's Samajwadi Party.

In many ways, it is their new comity that's being tested. In March, they drew a line under decades of rivalry to collaborate on a crucial election - for Gorakhpur, represented for nearly 20 years by Yogi Adityanath, the saffron-robe-wearing monk who became Chief Minister of Uttar Pradesh. Together, they easily wrested the BJP stronghold, proving that they could control India's most important political arena if they remained on the same side.

The BJP would have won nearly 50 fewer seats in the last general election if they had combined, according to their joint vote share in the 2017 election. 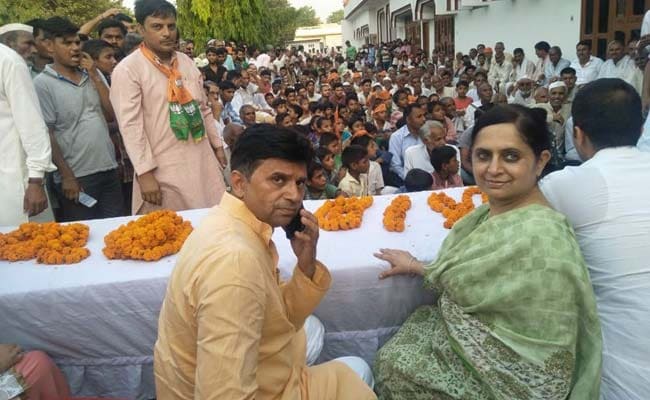 Kairana also provides other opposition parties with a crucial chance to case the joint ahead of 2019. If the Gorakhpur magic repeats, they will be incentivized to stick together; if not, the newly-achieved papering over of differences will quickly crumple.

For RLD president Ajit Singh and his son and vice-president of the party, Jayant Chowdhury, the Kairana election presents the opportunity to reclaim their core supporters of Jats, the dominant agrarian caste of Western UP, which shifted loyalties to the BJP in the general election after Hindu-Muslim violence tore through areas of Muzaffarnagar and Shamli districts in 2013.

Kairana parliamentary constituency which has a population of 16 lakhs and is located in Shamli district was one of the areas worst hit by the violence. By choosing a Muslim candidate, the RLD - and by extension, the opposition - is hoping to unite its Jat base with Muslim voters, who form about nearly half the population in Kairana.

At least 60 people, mainly Muslims, were killed in the 2013 Western UP riots and more than 50,000 were displaced from their homes. Hindu votes consolidated around the BJP as Prime Minister Narendra Modi wowed India in a campaign that gave him a succulent victory. Jats moved away from the RLD and did not return in the state election last year that saw Yogi Adityanath take over as head of Uttar Pradesh.

When Hukum Singh of the BJP won Kairana, his victory margin in 2014 of 2.30 lakh votes was more than the combined votes of the SP, BSP and RLD. 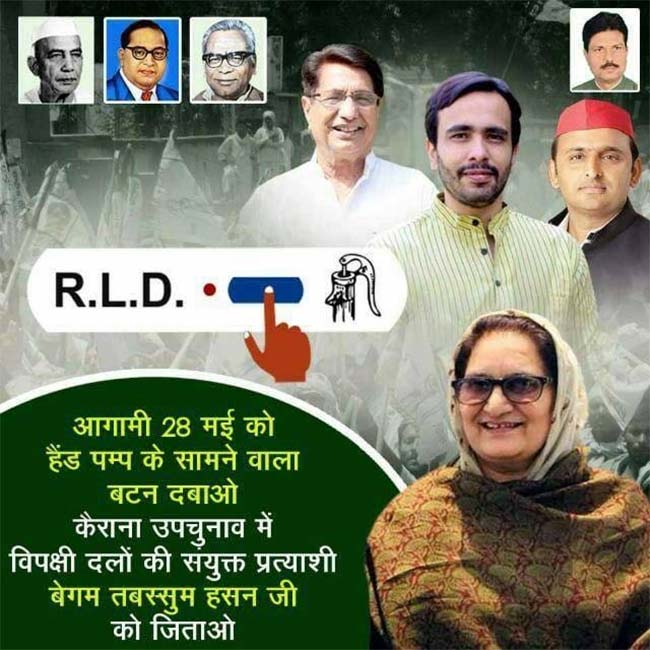 RLD candidate Tabassum Hassan had earlier won from Kairana in 2009 on a BSP ticket by defeating Hukum Singh. This time, she takes on his daughter

While campaigning for the state election last year, he alleged that nearly 350 Hindu families had fled the Muslim-dominated towns of Kairana and Kandhla due to "threats and extortion by criminal elements belonging to a particular community and lack of security." Investigations revealed that some of the people on his list were dead, or had left their homes for other reasons, many of them several years before the 2013 riots. Later, Hukum Singh also backtracked saying there was no communal angle to the migration. But the BJP was able to make the alleged exodus of Hindus into a politically emotive issue and it won four of the five assembly seats that together make up the Kairana Lok Sabha constituency.

The loss, however, had a sliver of hope for the opposition.

In 2014, Hukum Singh had managed a whopping 50.54 per cent of the votes; in 2017, his party's share fell by 24%. And his daughter, Mriganka Singh, was defeated by Nahid Hassan. Next week's election is between his mother, Tabassum, and Mriganka Singh.

"It was a section of the 1.5 lakh Hindu Jat vote which moved away from the BJP (in last year's state election)," claims Yashpal Mallik, President of a local Jat organization who says the community is now upset with the BJP for failing to include it in groups that benefit from affirmative action policies. "For a while, the Jats believed in Narendra Modi's promise of creating employment outside of agriculture and government through programmes like 'Make in India', but where are the jobs after four years? Young Jats have no choice but to demand reservation or live off the land, where the distress is growing, because the BJP has reneged on its assurances to sugarcane farmers." 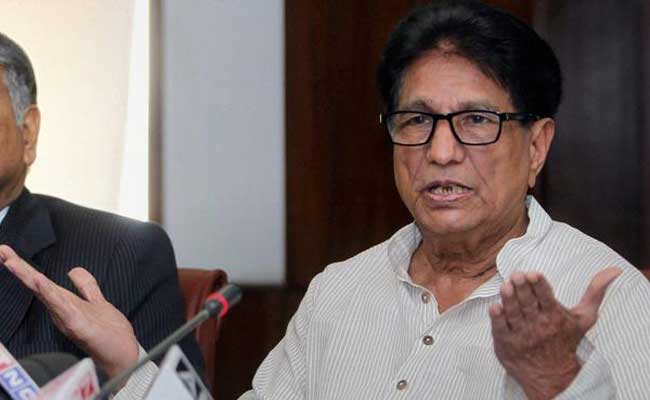 Ajit Singh is confident of re-building the Rashtriya Lok Dal's Jat-Muslim vote bank ahead of the 2019 polls.

Kairana has six sugar mills which together have purchased sugarcane worth nearly 1,200 crores from farmers since October last year. But instead of paying them within the stipulated time of 14 days, the mills, almost eight months later, still haven't paid half the bill.

"And this is the situation when the Minister for Sugarcane Development, Suresh Rana, is one of the MLAs from the Kairana parliamentary constituency," Jayant Chowdhury points out to a gathering of farmers. "We would have ensured timely payment to every cultivator, but you did not elect a single MP or MLA from the RLD. You were persuaded to think of yourselves, not as farmers, but as Hindus. And look where it got you?"

He is campaigning in Phugana, a large and prosperous village dominated by Jats where 16 Muslim men were killed in 2013 and six women allegedly gangraped. Phugana's Jats have voted for the BJP in the two elections since then, but this time, Balbir Mallik, a prominent landlord, insists "Our community will vote for the RLD candidate (Tabassum Hassan) in spite of her religion, because this time we are supporting Ajit Singh. Every caste in UP has its own party now, whether it's the Yadavs, Rajbhars or Kurmis. We had one for more than two decades, but drifted away from it, now it is the time for ghar-wapsi (home-coming)."

In the nearby village of Lisad, where 13 Muslims were killed in 2013, Rajinder Chowdhury, a local Jat leader, is accused in 36 cases of arson and murder. In February, Yogi Adityanath's government began the process of withdrawing the FIRs or police cases filed against some of the Hindu Jats. "But nothing has happened so far," said Mr Chowdhury because the cases against him remain open. 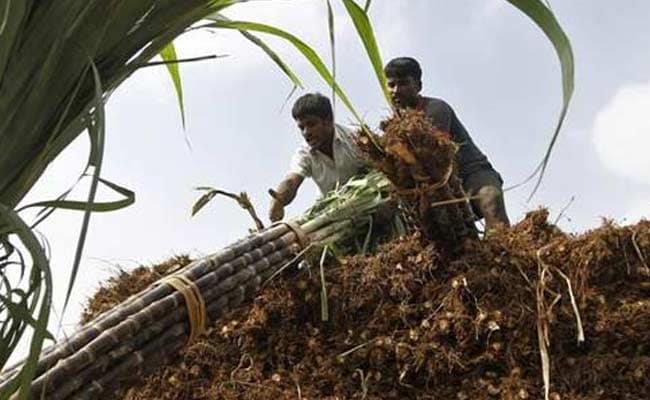 Farmers in UP's sugarcane belt have accused the Yogi government of failing them.

By having Mayawati on its side - though her support is implicit rather than explicit - the opposition also hopes to win Kairana's 2.5 lakh Dalits who in 2014 also voted for the BJP.

"We got carried away by the BJPs 'bahu beti bachao' - 'save our daughters and daughters-in-law rhetoric' in the build-up to the Muzaffarnagar-Shamli riots, but soon realised that our own bahu-betis were repeatedly teased and raped, but no one talked about protecting their honour," says Sachin, a college student and member of the Bhim Army, an organization of young Dalits formed in 2015 after attacks on Dalits by upper castes in Saharanpur, also in Western UP.

Mriganka Singh, however, is confident of victory. Apart from the BJP's traditional upper caste Hindu vote, she also has the loyalty of members of her own caste, Kairana's 1.4 lakh Hindu Gujjars. She refutes the charge that Yogi Adityanath's administration, accused of extra-judicial encounters, has targeted minorities including Muslims. "Law and order has improved," she says, cheered on by her supporters.

Promoted
Listen to the latest songs, only on JioSaavn.com
The biggest push for Mriganka Singh, however, could come from PM Modi himself who isn't campaigning for her but is inaugurating a major freeway and holding a public meeting next door in Baghpat the day before voting. The opposition has said this amounts to indirectly violating the prohibition on campaigning in the hours before voting.

Like with other by-elections in Uttar Pradesh, Kairana is a political notable. And will serve as a crash course on 2019.