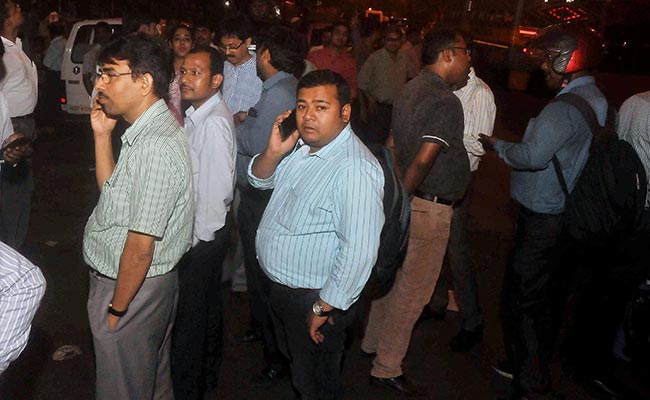 People come out of their office buildings after an earthquake in Kolkata on April 13. (PTI Photo)

Imphal: The earthquake that hit the Myanmar-India border region yesterday night damaged many structures and left at least 30 people injured in Manipur, but there has been no report yet of any loss of life, officials said.

At least 30 people were injured in the earthquake that measured 6.8 on the Richter scale, the officials said today.

Several houses, school buildings and markets in Manipur were damaged by the tremors, they said.

In neighbouring Assam, two persons were killed and over 70 others were injured in the quake.

One primary school building at Khekman in Thoubal district of Manipur collapsed completely, destroying the adjacent house of Jamir Khan.

Wednesday's earthquake exacerbated the damage caused to some structures -- such as the 150-year-old Ima Keithel or Mothers' Market complex -- that had already been shaken by the January 4 earthquake.

Following the January quake, the government had declared the Mothers' Market complex unsafe for the vendors, who are exclusively women.

Officials told Indo-Asian News Service today the damage to the portions of the market complex has worsened. The district administration has barred women vendors from doing business in the complex.

Several houses in Nungba sub-division of Tamenglong district were also damaged by the tremors on Wednesday. There are reports that several persons have been injured. The district administration is collecting information on the number of people injured and houses damaged in the hill district.

Police officials told IANS in Imphal that so far there is no report of any death in the quake-related incidents.

Health officials said that medical teams, medicine supplies and equipment have been kept in readiness in case any report is received of injuries in the far-off hilly and rural areas of the state which lack in proper medicare facility.