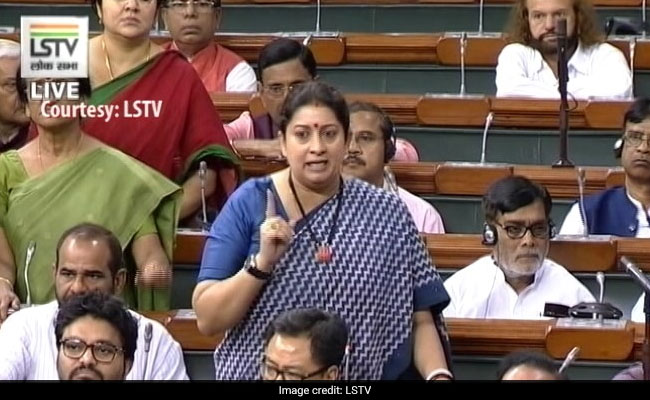 Smriti Irani's remarks came on Tuesday in response to a question. (File)

The government is considering amendments to the Prevention of Child Marriage Act to make reporting of child marriages mandatory for the agencies concerned, Women and Child Development minister Smriti Irani has said.

The number of cases of pregnancies under 18 years is as high as 21 per cent. Children born from child marriages are more prone to undernourishment, the minister said.

"It is part of our main focus in our engagements with the chief ministers. One of the problems is that unlike POCSO (Protection of Children from Sexual Offences Act), in which reporting a case is mandatory, there is no mandatory reporting of child marriage," she said at an event here.

"We are looking at these kind of interventions in the Act itself and discussing the possibility of amending it. POCSO had mandatory reporting so a lot of cases came to fore. There was a lot of awareness that if you do this it will get reported. We want something similar in the Child Marriage Act," Ms Irani added.

Section 21(1) of the Protection of Children from Sexual Offences (POCSO) Act, 2012, requires mandatory reporting of cases of child sexual abuse to law enforcement authorities, and applies to everyone, including parents, doctors and school personnel.

The legal age for marriage in India is 18 years for women and 21 years for men.

According to a study based on Census 2011, there are 2.3 crore child brides in the country. The National Family Health Survey (NFHS) 2015-16 also showed that 26.8 per cent women were married off before they turned 18.

According to the NFHS 2015-16 data, nearly eight per cent girls in the age group of 15-19 had already become mothers or were pregnant at the time of the survey.

In October 2017, the Supreme Court ruled that sexual intercourse with a minor ''wife'' amounts to rape, as under no circumstances can a child below 18 years give consent, expressed or implied, for sexual intercourse.

The World Health Organisation, in a report dealing with the issue of child brides, found that though 11 per cent of the births worldwide are among adolescents, they account for 23 per cent of the overall burden of diseases. Therefore, a child bride is more than doubly prone to health problems than a grown up woman, it had said, expressing dismay over the alarming number of child brides in the country.