33-year-old Jyoti Nainwal was among the 29 women cadets, 124 male cadets and 25 foreign cadets to get commissioned on November 20 at the Officers Training Academy. 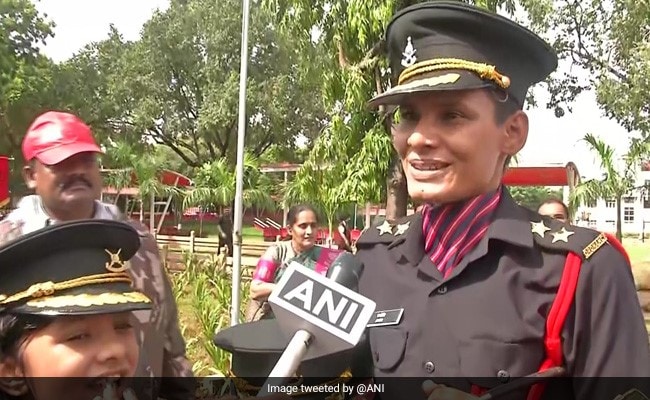 Army officer Jyoti Nainwal's husband died in 2018 after getting critically wounded in a J&K encounter.

It was the inspiring words of her mother that motivated Jyoti Deepak Nainwal, the proud wife of martyred Naik Deepak Kumar, to rise from a being a humble homemaker in Uttarkhand and become an Army officer.

Jyoti Nainwal's mother wanted her to set an example for her children to scale greater heights, notwithstanding the emotional distress, rather than encouraging them to do so by citing examples from the lives of other successful people.

A Dehradun-based homemaker hailing from a humble background, Ms Nainwal's life and world had all along revolved around her loving husband and her children -- 9-year-old daughter Lavanya and 7-year-old son Reyansh, in addition to her extended family.

When her husband died in 2018 after getting critically wounded in an encounter - Op Rakshak - with terrorists in Jammu and Kashmir, her life practically fell apart.

While the conservative world might have expected her to just bring up her children and help them succeed in their lives, her mother wanted her to lead from the front.

Quoting her mother, Ms Nainiwal said, "Beta (child), take this situation as an opportunity. Don't raise them by giving other's examples, but set yourself as an example in front of them and make them feel proud. Teach them to sail through the ups and downs of life."

These motivating words, the rock-solid support of her brother, the Mahar regiment, and her husband's encouragement that she should try to join the Army "if anything happened to me" led her to resolve that she should serve the armed forces.

It was not, however, an easy task.

"Brigadier Cheema and Col MP Singh took the responsibility to be my mentors. They both played a huge role in getting me prepared for the Service Selection Board. My English was not that good as all my life I was only involved in household responsibilities," she said, speaking the challenges she had to surmount.

Eventually, Jyoti Nainwal made it through sheer determination and with the guidance of Army veterans.

As many as 16 male cadets and nine women cadets from foreign countries also completed their training in this period.

Naik Deepak Kumar sustained a gunshot wound on April 11, 2018 in an encounter with terrorists and he was shifted to the Army's RR Hospital in Delhi.

Ms Nainwal's first visit to a metropolis, the national capital, turned out to be to the hospital to take care of her wounded husband. He was bedridden due to a spinal injury and had lost sensation in his limbs.

"I successfully pretended to be strong in front of doctors, so they allowed me to stay with him and look after him," she said.

Naik Deepak Kumar was later shifted to another facility in Pune.

Naik Deepak Kumar was recruited into the Mahar regiment in 2003, an infantry regiment known for its fearless soldiers and innumerable battle honours. His last posting was with 1 Rashtriya Rifles battalion, deployed in Jammu and Kashmir.