Manoj Tiwari was addressing the Delhi leg of BJP's Vijay Sankalp bike rally, which had party members taking to the streets in an effort to connect with the people ahead of the Delhi elections. 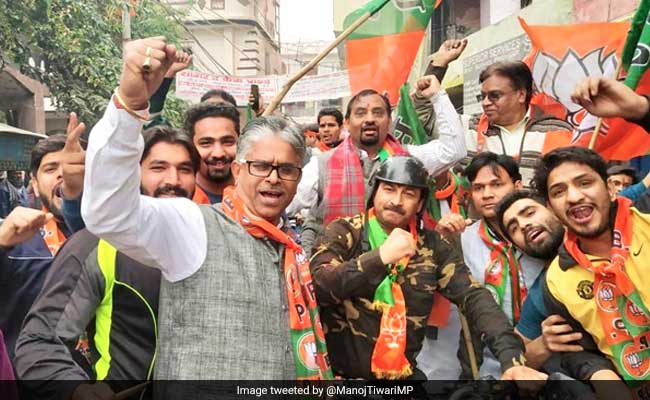 BJP leader Manoj Tiwari addressed a party rally wearing military fatigues in New Delhi on Saturday, drawing accusations of trying to cash in on the recent aerial face-off between India and Pakistan at a time when the country was gearing up for the Lok Sabha polls.

Among the first to target the BJP lawmaker on social media was Trinamool leader Derek O'Brien, who accused him of politicising an incident that had Indian Air Force pilots putting their lives on the line. "Shameless. Shameless. Shameless. Manoj Tewari BJP MP and Delhi President wearing Armed Forces uniform and seeking votes. BJP-Modi-Shah insulting and politicising our jawans. And then giving lectures on patriotism. Low life," he tweeted.

Mr Tiwari was addressing the Delhi leg of BJP's Vijay Sankalp bike rally, which had party members taking to the streets in an effort to connect with the people ahead of the polls. While party chief Amit Shah had launched the rally in Madhya Pradesh's Umaria, Defence Minister Nirmala Sitharaman flagged it off in Delhi.

National Conference leader Omar Abdullah also posted a photograph of Mr Tiwari addressing BJP supporters in the military jacket, along with a caption that read: "And senior BJP leaders including the Hon PM want to lecture the opposition about politicising the recent military action. Go figure!"

Artiste-turned-Congress leader Sharmistha Mukherjee said that Mr Tiwari's act was nothing short of a political stunt. "Utterly disgusting & disgraceful! A soldier sacrifices his life to uphold the dignity & honour of this uniform. And BJP MP @ManojTiwariMP is turning it into Tamasha resorting to cheap stunts & cheaper politics," she tweeted.

However, Mr Tiwari rejected the opposition's claims that wearing a military uniform amounted to denigrating the armed forces. "I wore (the uniform) simply because I felt proud of my Army. I am not in Indian army but i was expressing my feeling of solidarity. Why should it be treated like an insult? I have the highest regard for our Army. By this logic, if I wear a Nehru Jacket tomorrow, will it be an insult to Jawaharlal nehru?" he questioned in a tweet.

The ruling BJP and the opposition have both accused each other of politicising the stand-off between India and Pakistan in the wake of the Pulwama terror attack. While parties such as the Congress and the Aam Aadmi Party have claimed that the ruling BJP was trying to gain political mileage out of the military's achievements ahead of the polls, the latter has charged them with casting doubts on the armed forces at a time when the country should be standing united against external threat.