India said it had carried out air strikes on a Jaish-e-Mohammed camp in Pakistan's Balakot, killing a "large number of terrorists" early Tuesday.

Five days after India announced it had crossed the Line of Control to bomb the main training camp of terror group Jaish-e-Mohammed in Balakot in Pakistan, the government has yet to release any images of what was hit. Opposition leaders like Mamata Banerjee have praised the Air Force's venture as heroic but have said that the government must explain, especially now that Wing Commander Abhinandan Varthaman is safely home after spending two days in Pakistan's custody, some information of the Balakot strikes.

Satellite images of the strikes, which are being treated as highly confidential by government officials for now, are likely to reveal multiple impact points made by the Israeli bombs used by the Mirage fighters that crossed up to 20 km over the Line of Control at 3:30 am on February 26 in an operation that lasted approximately 19 minutes.

The target was six buildings in the Jaish terror base.

NDTV has learned that imagery acquired by the government from two different sources will likely establish that the Spice 2000 glide bombs hit five separate structures along a ridge-line to the west of the town of Bisian near Balakot in Pakistan's Khyber Pakhtunkhwa province. 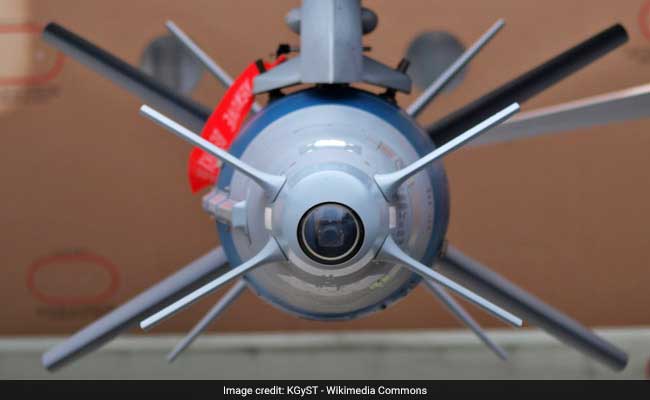 Small holes in the roofs of these structures indicate the point of entry of the Israeli-made bombs which are designed to penetrate buildings, bunkers or shelters before exploding inside. The Spice 2000 has been described as a "decapitating weapon", one designed to take out enemy leadership through precise strikes.

Some of the Spice 2000s used may not have brought down the entire structure that it hit.

As reported earlier by NDTV, a group of Indian Air Force Mirage 2000s made a ''shallow incursion'' across the line of control to reach an optimal launch point, where onboard systems electronically permitted the release of the Spice 2000 glide bombs.

The attack jets intruded between approximately 3 and 20 km across the Line of Control and flew individually to their launch point to prevent early detection by Pakistan radar. One of the French-designed Mirages returned without being able to launch its weapon because the onboard computer did not clear the release of the weapon.

After being dropped, the glide bombs coasted dozens of kilometres following pre-fed GPS coordinates. As they approached their targets, they "looked" for structures that matched pre-loaded intelligence imagery of the terror training camp. They then honed in on their assigned targets and struck.

A buildup of cloud cover over Balakot in the hours following the strikes meant that an Indian satellite was unable to collect high resolution imagery as it passed over the area later that morning.

Analysis of commercially available satellite imagery by the International Cyber Policy Centre in Australia has questioned the government's claim that the strikes on Balakot were successful. According to Nathan Ruser, the author of the report, "Satellite imagery, acquired by Planet Labs Inc. on the morning of February 27 and accessed by ASPI" calls the government of India's claim "into question".

"No evidence of damage to the facility or nearby areas is visible on the images," the report says. Mr Ruser also mentions that local media have published "multiple small craters in the vicinity" indicating that the IAF missed its targets.

Senior officials NDTV has spoken to have categorically denied that the Spice 2000 glide bombs missed. They say the craters being reported could be areas where terrorists from the camps train with Improvised Explosive Devices. They add that the Spice 2000 would not have left craters if they had struck these areas. Instead, they would have left mounds of earth since they are designed to penetrate their target before exploding underground.

NDTV has also been shown a non-classified satellite image of a target in the Indian Air Force's test range in the Pokhran desert once it was hit by a Spice 2000 bomb in September, 2016. The structure, shown and circled below, has a small hole on its roof, the entry point of the weapon. A similar point of entry will be visible, according to officials, in the satellite imagery of the Jaish-e-Mohammed camp. 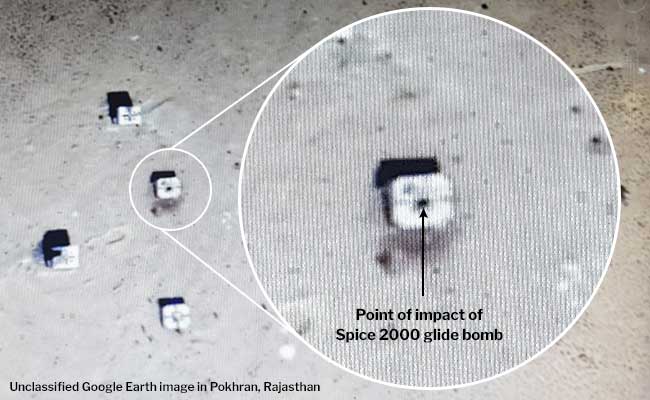 A Spice 2000 bomb impact at test site in Rajasthan's Pokhran.

Earlier on Sunday, in an article in The Print, the award-winning journalist Taha Siddiqui has reported the emergence of an audio recording on February 28, two days after the strikes, at an event of the Jaish-e-Mohammed in Peshawar. The group "goes on to acknowledge that Indian forces did carry out an airstrike and dropped bombs on their markaz (centre) in Balakot where he claims students were learning about the duty of jihad." The Jaish claims no one died in the attacks.

Francesca Marino, an independent journalist, who has reported extensively in Pakistan, has reported that "eyewitnesses present at the site of India's 26 February bomb strikes against a Jaish-e-Muhammad base say they saw up to 35 bodies being transported out of the site by ambulance hours after the attack."

These contradict several other reports including in The New York Times which said "The view that little had been damaged was supported by military analysts and two Western security officials, who said that any militant training areas at the site, in the Pakistani province of Khyber-Pakhtunkwha, had long since dispersed."

Earlier, government sources had told reporters that about 300 terrorists had likely been eliminated in the attack on the Jaish camp. However, in a joint press conference on February 28, Air Vice Marshal RGK Kapoor said it was premature to assess the damage and the number of casualties.

The delay in the release of evidence from satellite imagery is triggering intense speculation of what really transpired. Senior government sources have told NDTV that it was up to the government to decide when and whether to release any satellite images that may be available.