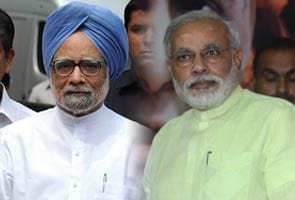 The PM will be the chief guest and the Gujarat Chief Minister the special guest.

Ahmedabad: Prime Minister Manmohan Singh and BJP's prime ministerial candidate Narendra Modi, will share the stage at the function to inaugurate a museum dedicated to Sardar Vallabhbhai Patel's life in Ahmedabad on October 29.

Two days later, on October 31, Mr Modi would be laying the foundation stone of a gigantic statue of the first Home Minister of the country near Sardar Sarovar Dam.

The museum has been built by the Sardar Vallabhbhai Patel Memorial Society.

Union Minister Dinsha Patel, who is the chairman of the society had met Mr Modi and invited him to the function.

The invitation card of the function says that the PM will be the chief guest and the Gujarat Chief Minister the special guest.

Promoted
Listen to the latest songs, only on JioSaavn.com
The BJP, and especially Mr Modi have often accused Congress of ignoring Sardar Patel's legacy and promoting Nehru-Gandhi dynasty.