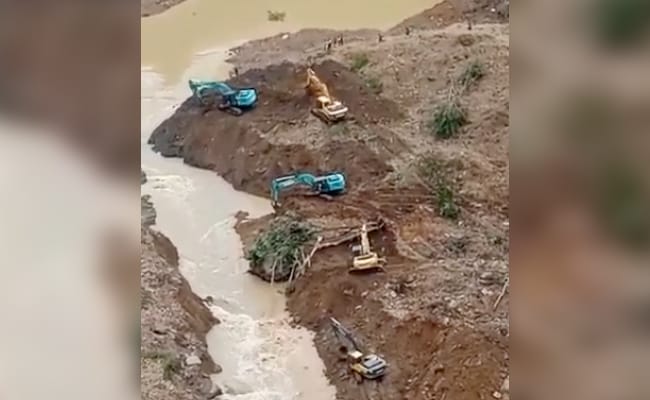 Manipur landslide: At least 45 others, including several jawans, are still missing.

Excavators are being used to pull out bodies from a river in Manipur's Noney district where several people, including Territorial Army personnel, are feared buried by landslides.

#ManipurLandslide | Excavators being used to recover bodies from the river downstream of the Tupul yard railway construction site.

10 reported dead in the landslide that occurred near the construction site on June 29. pic.twitter.com/ZMdIwSoj8P

At least 45 others, including several jawans, are still missing - feared buried near the Ijai river.

Authorities have deployed excavators in the difficult downstream terrain of the river, to pull out the bodies.

Search operations are being conducted by the Indian Army, Assam Rifles, and Territorial Army, besides the central and state disaster forces at the site. The Territorial Army provides security to a railway line being built from Jiribam district to Imphal, the state capital.

A Thorough Wall Radar is being inducted by air to detect the presence of personnel buried in the debris, an official release said earlier today. A search-and-rescue dog is also being inducted.

So far, 13 personnel of the Territorial Army and five civilians have been rescued, it said, adding that the search for missing personnel will continue throughout the day.

Chief Minister N Biren Singh has announced Rs 5 lakh financial assistance each for the family of those who died and Rs 50,000 for those injured.