Mamata Banerjee was referring to the attack on Trinamool Congress Rajya Sabha MP Sushmita Dev allegedly by BJP workers in Tripura during a public outreach programme near Agartala on Friday. 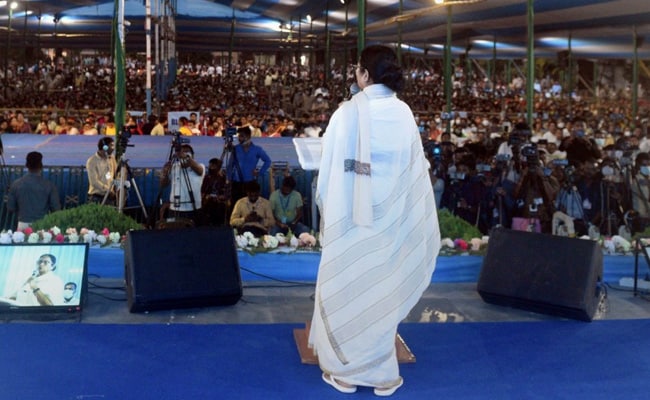 Mamata Banerjee speaking at a rally in West Bengal's Siliguri.

West Bengal Chief Minister Mamata Banerjee on Sunday accused the BJP of beating up political opponents if they dare to take out rallies in Tripura, and claimed that even a woman MP was not spared.

She was referring to the attack on Trinamool Congress Rajya Sabha MP Sushmita Dev allegedly by BJP workers in Tripura during a public outreach programme near Agartala on Friday. The Trinamool seeks to dislodge the saffron party from power in the North-eastern state in the 2023 assembly election.

Denying the BJP's claims of violence on its workers in West Bengal, the Trinamool supremo said, "There is peace in West Bengal and it is not the peace of the graveyard."

"In contrast look at the happenings in your state (Tripura). Whoever dares to take out rallies opposing the BJP is hit with sticks. They don''t even allow the injured Trinamool workers to be treated at a hospital. A young party worker was thrashed and he had to be rushed to the SSKM Hospital (in Kolkata)," Ms Banerjee said at a rally in Siliguri.

Ms Banerjee said opposition parties face no problem in carrying out political programmes in West Bengal but the BJP does not follow this principle.

"The daughter of (late Congress leader) Santosh Mohan Dev was attacked in Tripura as she went to attend a party programme. A woman MP was attacked," she said on the incident in which Sushmita Dev was manhandled and her car was damaged allegedly by BJP workers at Amtali area near Tripura capital Agartala.

In BJP-ruled Uttar Pradesh too, opposition parties are not allowed to move freely, Ms Banerjee claimed.

A delegation of Trinamool MPs early this month had met family members of the farmers killed in the violence in UP's Lakhimpur Kheri, claiming that they dodged policemen by posing as tourists.

"Every day, the BJP peddles falsehood and tries to promote disharmony among people. But the Trinamool will not allow the BJP to carry on their policy of hatred. We will protect the culture and heritage of Bengal, the place of communal harmony," the Trinamool boss said at the rally.

Ms Banerjee also said she has doubts about the Centre's much-touted achievement of reaching the 100 crore vaccination mark against Covid-19 in the country.

"If you consider the 18-year-old people, the total population will be 130-150 crore. The vaccination of children has not yet started and only 29.51 crore (people) got two doses.... No idea how they came at the 100 crore mark. It is hocus pocus," she said.

West Bengal, on the other hand, inoculated seven crore people with at least one dose, the state chief minister said.

"We will soon be able to reach 100 per cent vaccination despite getting inadequate supply from the Centre. We will procure on our own from vaccine makers," she said.

Ms Banerjee said West Bengal is in the third place across the country in vaccination figures though, she claimed, it received fewer vaccines compared to UP, Maharashtra and Gujarat.

At the rally in Siliguri, the largest city in north Bengal, the CM said her government mostly administered Covishield vaccine while she had written to Prime Minister Narendra Modi urging him to ensure that Covaxin is approved by the World Health Organisation (WHO).

The Trinamool stood for unity and integrity of north Bengal and will not allow the region's division, Ms Banerjee said without elaborating.

BJP MP John Barla, who is now the Union minister of state for minority affairs, had in June sought a separate union territory comprising all north Bengal districts, arguing that the region has barely seen any development over the past decade.

The CM also criticised the Centre for recently amending the BSF Act empowering the border guarding force to undertake search, seizure and arrest within a 50 km stretch, up from the existing 15 km, from the international border in Punjab, West Bengal and Assam.

"We have nothing against the BSF but we must be told about the motive behind such a decision by the Centre. We have good relations with Bhutan, Bangladesh and others. We won't allow any bid to instigate riots by any forces in border areas of West Bengal where the situation is peaceful," she said.

She also attacked the BJP for the rising prices of fuel claiming that the middle class and poor people are forced to shift to chullah as the price of LPG cylinder has touched Rs 850-900.