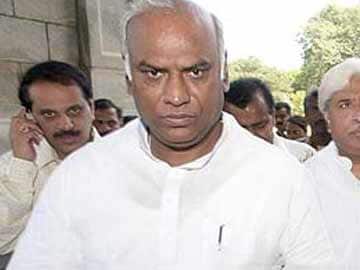 The total strength of the Lok Sabha is 543. To stake over the Opposition leader's post, a party, therefore, will have to win at least 55 seats. The Congress, however, had to rest content with a mere 44 seats, its lowest-ever tally in the House.

There was speculation earlier that either former union parliamentary affairs minister Kamal Nath, who has bagged Chindwara for the nineth time, and is the seniormost member of the Lok Sabha, or former petroleum minister Veerappa Moily would be designated as the leader of the Congress party in the House, as the Congress president and her son Rahul had expressed their unwillingness to assume the responsibility.

Mr Kharge, 72, retained the Gulbarga Lok Sabha seat in Karnataka. He is one of the most prominent Dalit faces of the Congress party, and was a member of the Karnataka assembly for a record nine terms. He moved over to the Lok Sabha in 2009, when he won from Gulbarga.

When asked whether the prospect of taking on Prime Minister Narendra Modi, a powerful orator, would be a challenging task, Mr Kharge told NDTV, "I don't want to talk about these things today. I am thankful to Mrs Gandhi for having faith in me."

Gulbarga is one of the nine Lok Sabha seats won by the Congress in Karnataka. The state sends 28 members to the Lower House of Parliament.

Promoted
Listen to the latest songs, only on JioSaavn.com
In a House of 543, the BJP and its allies have a strength of 336 seats. The BJP, with 282 seats, won a majority on its own. Prime Minister Narendra Modi, who fought from two constituencies, winning both, has resigned from Vadodra. He has decided to retain his Varanasi Lok Sabha seat