Over 60 Killed, More Than 1000 Injured as Earthquakes Hit Nepal

Nepalese patients are carried out of a hospital after huge earthquakes hit the country on Tuesday. (Agence France-Presse)

New Delhi: Four earthquakes shook devastated Nepal in quick succession on Tuesday afternoon, the first a massive 7.3 on the Richter scale. 48 people have died in Nepal and nearly a 1000 are injured. (Track live updates)

In India, where tremors were felt were felt across Northern and Eastern India, 17 people have died in Bihar and Uttar Pradesh, states that border Nepal.

The earthquakes sent terrified residents running onto the streets in Nepal's capital, Kathmandu, from buildings already damaged in the massive 7.9 magnitude earthquake that had struck three weeks ago killing more than 8000 people.

In Delhi, buildings shook and office workers were evacuated. People rushed out of their homes and offices in cities like Gurgaon near Delhi. The metro service in the capital was halted for a few minutes.

Prime Minister Narendra Modi held a meeting with top officials to review the situation. His office then tweeted his instructions.

PM directed all concerned authorities to be on alert for carrying out rescue and relief operations, as required.

An Indian Air Force MI-17 helicopter stationed in Kathmandu was sent to assess damage at Namche Bazaar, close to Mount Everest and 68 kilometres from the epicenter of the first quake.

Medics and volunteers formed a human chain at a Kathmandu hospital to keep a path open for ambulances.

Whole villages were destroyed in the April 25 quake in Nepal while large parts of Kathmandu were destroyed, leaving nearly 18,000 people injured and tens of thousands homeless. Nearly 80 people had died in Bengal and Bihar.

Like April's earthquake, today's was shallow - 15 km deep. Shallow quakes are more deadly because the amount of energy released is focused over a smaller area.

Promoted
Listen to the latest songs, only on JioSaavn.com
Helpline Numbers: 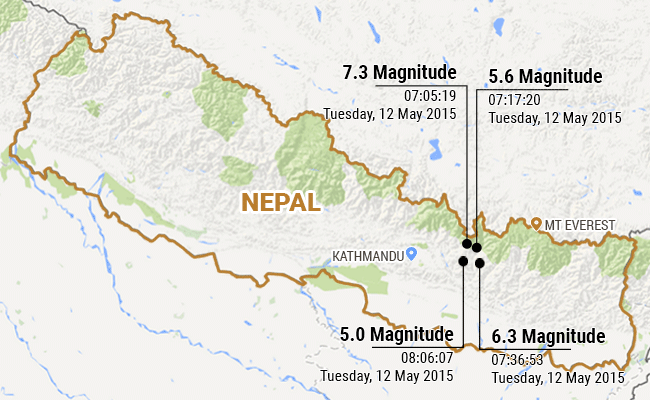 "Fan" Gita Gopinath Tweets Big B Video, Some Point To His 'Sexist' Remark