Kathmandu, Nepal: Four earthquakes hit devastated Nepal in quick succession today, sending terrified residents running onto the streets in the capital of Kathmandu; large tremors were felt across Northern India, including Delhi at about 12.35 pm.
May 15, 2015 16:25 (IST) 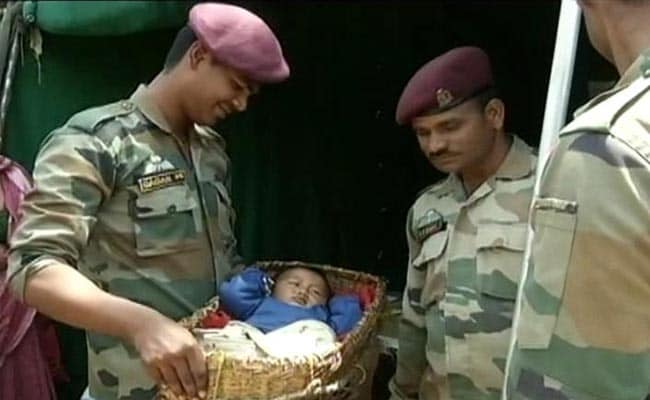 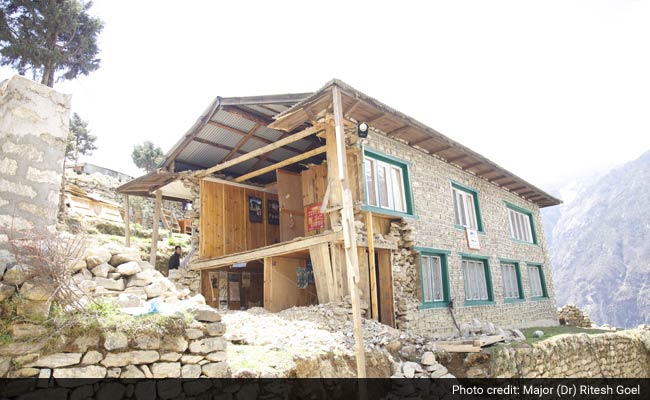 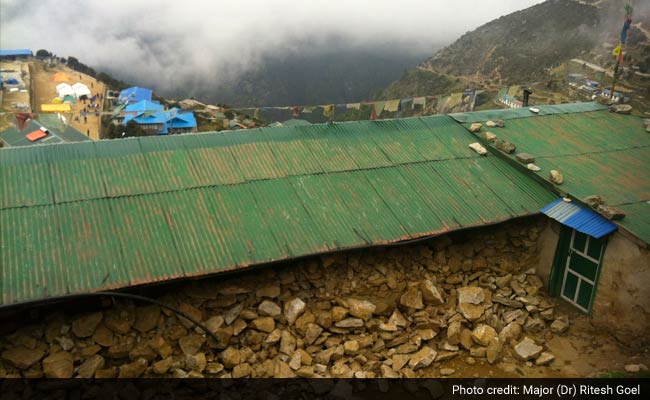 May 12, 2015 19:36 (IST)
42 Killed, Over 1000 Injured as Earthquakes Hit Nepal; 17 Also Killed in India
Four earthquakes shook devastated Nepal in quick succession on Tuesday afternoon, the first a massive 7.3 on the Richter scale. 42 people have died in Nepal and nearly a 1000 are injured. In India, where tremors were felt were felt across Northern and Eastern India, 17 people have died in Bihar and Uttar Pradesh, states that border Nepal.  The earthquakes sent terrified residents running onto the streets in Nepal's capital, Kathmandu, from buildings already damaged in the massive 7.9 magnitude earthquake that had struck three weeks ago killing more than 8000 people.
May 12, 2015 18:50 (IST)

Here's a video we have just received from @redcrosscanada near Dhunche, #Nepal, after today's #NepalQuake. pic.twitter.com/R82VlU4PLs

A new earthquake and several powerful aftershocks hit devastated Nepal on Tuesday, killing at least 24 people and sending terrified residents running into the streets of the traumatised capital.

Tuesday's quake was felt as far away as New Delhi, and officials said it caused buildings to collapse in Tibet in neighbouring China. 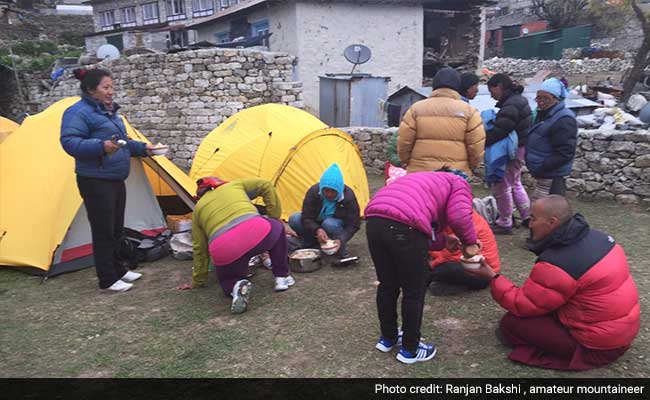 Jet Airways has announced that it has diverted its flight 9W266 to Lucknow.

People reportedly ran out into safety and the airport was swiftly evacuated. "The airport is closed for operations right now," Birendra Prasad Shrestha, manager at the airport, told AFP.

Videos posted on social media showed people rushing out to the open and crowding the tarmac, many of them talking on the phone soon after the quake struck.

People still standing out on tarmac at KTM airport, a lot of them on the phone #NepalQuakepic.twitter.com/mPHchGiXVI

May 12, 2015 14:52 (IST)
PM Modi Asks Authorities to be on Alert After Earthquake
Four earthquakes shook devastated Nepal in quick succession today, sending terrified residents running onto the streets in the capital of Kathmandu; large tremors were felt across Northern India, including Delhi at about 12.35 pm.

In Delhi, buildings shook and office workers  were evacuated.  People rushed out of their homes and offices in cities like Gurgaon near Delhi.  The metro service in the capital was halted for a few minutes.   Two people are reported killed in Bihar, which borders Nepal.

Prime Minister Narendra Modi held a meeting with top officials to review the situation.  Home Minister Rajnath Singh said that emergency relief teams are on standby.  "India is ready to provide all the support which Nepal would require," the minister told reporters.

PM Modi directs all concerned authorities to be on alert for carrying out rescue and relief operations, as required. He took stock of the situation following the quake at a high-level meeting.

Jet Airways flight #9W266 to Kathmandu is diverting to Lucknow because of Kathmandu Airport closure. pic.twitter.com/bvRxMBIG59

Please do not panic and maintain calm. Earthquake situation is being closely monitored & officials are already in the field


"Buildings down in Chautara ...Bodies being brought out of buildings," the International Organization of Migration, a United Nations agency, said on its Twitter feed.

Three major landslides were reported in Sindhupalchowk district, whose capital Chautara, with at least 12 people hurt, a district official said.

Sindhupalchowk was the region that suffered the most reported deaths in a 7.8 magnitude earthquake that devastated Nepal on April 25. The epicentre of Tuesday's 7.4 quake was in a remote conservation area between Kathmandu and Mount Everest. May 12, 2015 14:03 (IST)
Nepalese patients lie on stretchers in an open area after being carried out of a hospital building as a 7.3 magnitude earthquake hits the country, in Kathmandu on May 12, 2015. A 7.3-magnitude earthquake hit devastated Nepal, sending terrified residents running into the streets in the capital Kathmandu, according to witnesses and the US Geological Survey. The quake struck at 12:35pm local time in the Himalayan nation. 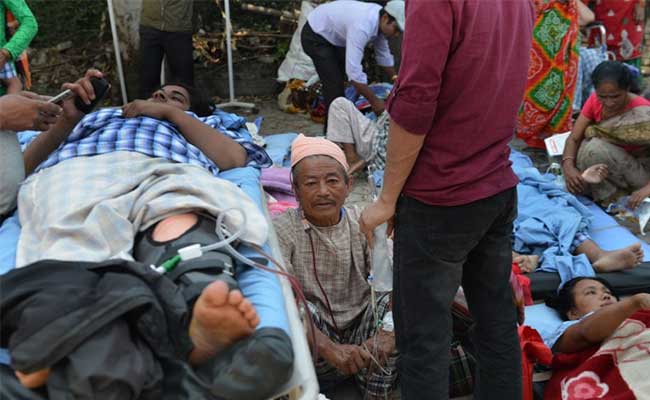 May 12, 2015 14:01 (IST)
The earthquake in Nepal has caused landslides in the Himalayan country. This photograph shows a landslide in Nepal's Dhading District. 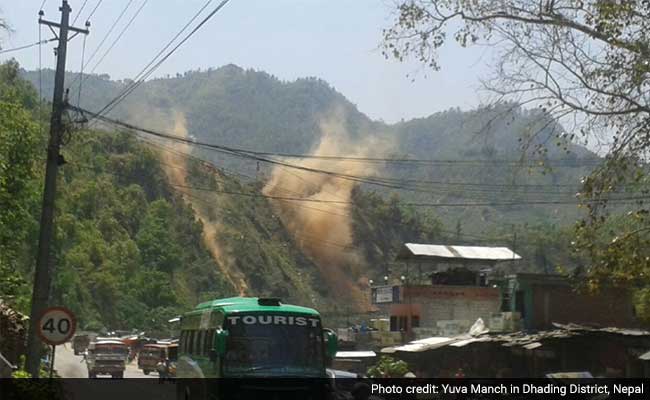 A huge earthquake measuring 7.4 on the Richter scale hit Nepal today at about 12.35 pm, US Geological Survey said; tremors were felt across major swathes of North India, including Delhi, at about 12.40 pm today.

News agency Associated Press reports that today's quake was epicentred between Mount Everest and the Nepali capital of Kathmandu, which was devastated on April 25 by a temblor that weighed in at 7.9.
EarthquakeNepal EarthquakeNepal QuakeNatural DisasterDelhi earthquakeDelhi tremors