Officer Was To Come Home For Wedding. Now, "Amar Rahe" At Final Journey

Major Chitresh Singh Bisht, 31, is survived by his parents and fiancee. His father is a retired policeman and his mother is a homemaker.

An army officer who was killed on Saturday while defusing an improvised explosive device in Jammu and Kashmir's Rajouri got an emotional farewell in his hometown in Uttarkhand as thousands of people joined his funeral procession.

"Amar Rahe, (immortal)," the crowd shouted as Major Chitresh Singh Bisht's coffin was being carried from his home by the army in a flower-bedecked military truck on his final journey in Dehradun.
People, came out on the streets and to their balconies and rooftops to pay their last respects.

The officer was spearheading a squad of bomb disposal unit when mines were found in Rajouri's Naushera sector. While one mine was diffused, another went off. He died of injuries.

Major Bisht, 31, is survived by his parents and fiancee. His father is a retired policeman and his mother is a homemaker. The young officer was preparing to get married in less than three weeks. He was expected to come home on February 28 for the wedding on March 7. 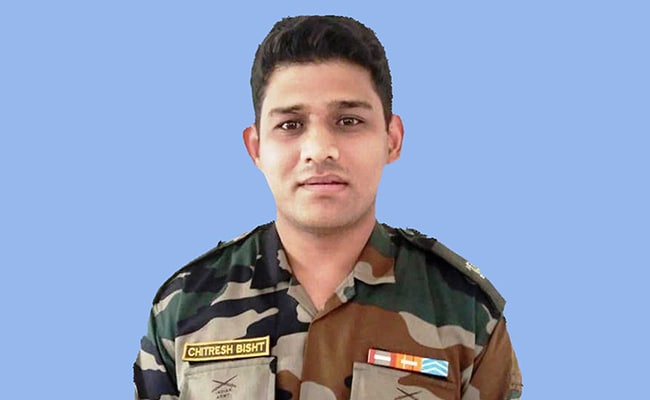 Major Chitresh Singh Bisht was spearheading a squad of bomb disposal when the explosion took place.

The body was sent to the Military Hospital in Dehradun on Sunday and was taken to his home this morning for the last rites.

"What an irony, he was supposed to come home for the wedding. Now we are waiting for his body," said his grieving father, SS Bisht, had said on Sunday.

The senior Bisht had already distributed most invitation cards for his son's wedding and also visited Pipali, their village in Uttarakhand's Kumaon region earlier this month to invite villagers and relatives.
Family members and neighbours called Major Bisht a brave and sincere officer from the Corps of Engineers.

Uttarakhand Chief Minister Trivendra Singh Rawat said, "I salute the supreme sacrifice made by Major Bisht in the service of the nation and send my heartfelt condolences to the martyr's family. The entire country stands with them in this hour of grief." The chief minister paid his last respects this morning.

Major Chitresh Singh Bishts's death came just 48 hours after more than 40 CRPF personnel laid down their lives in the worst terror attack on security forces in Jammu and Kashmir.