Maharashtra crisis: Eknath Shinde has claimed the support of nearly 40 (out of 55) Sena MLAs thus pushing it the Maharashtra government to the brink of collapse. 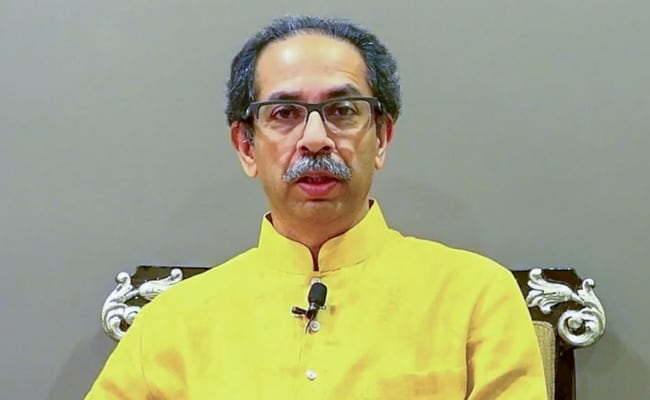 "I am resigning as the Chief Minister. I don't want a hand in the blood of Shiv Sainiks that may be spilled tomorrow," Uddhav Thackeray said in a Facebook live today.

Eknath Shinde has claimed the support of nearly 40 (out of 55) Sena MLAs, thus pushing it the Maha Vikas Aghadi government - comprising Shiv Sena, Sharad Pawar's Nationalist Congress Party (NCP), and Congress - to the brink of collapse.

Police have tightened security at the residences and offices of rebel Shiv Sena MLAs in the wake of the resignation of Maharashtra chief minister Uddhav Thackeray.

#WATCH Mumbai | Uddhav Thackeray after submitting his resignation as Maharashtra CM to Governor visited a temple along with his son Aaditya Thackeray pic.twitter.com/GvpR0QIKSd

Jun 30, 2022 00:21 (IST)
With 2nd Facebook Live In 8 Days, Chief Minister Uddhav Thackeray Logs Out
Exactly a week after he went online with an emotional 18-minute address and left the Maharashtra Chief Minister's residence amid a fledgling revolt in his party, Uddhav Thackeray did an encore on Wednesday and quit the job altogether, electing to bow out in the face of a vote in the assembly that he seemed certain to lose.
In his first address since Shiv Sena leader Eknath Shinde left Mumbai for Gujarat's Surat with 21 MLAs in the dead of night last Monday - Mr Thackeray had said he was "ready to quit" anytime, but stopped short of announcing his resignation as Chief Minister.
The 61-year-old said he was "hurt" at his own party men turning on him and spoke his heart out to Maharashtra and his party - all online, given his Covid positive status. Some would even say his voice was shaky, Mr Thackeray said, adding that it would be on account of the coronavirus. 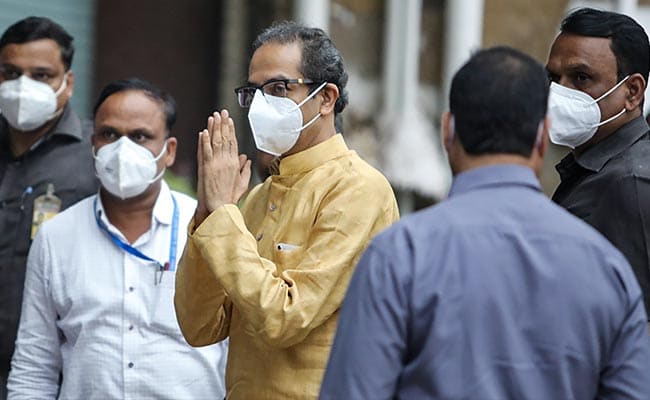 #WATCH Mumbai | Governor Bhagat Singh Koshyari accepts Uddhav Thackeray's resignation as Maharashtra CM. He had asked Uddhav to continue as CM until an alternate arrangement is made: Raj Bhavan pic.twitter.com/nWQ26bXkPN 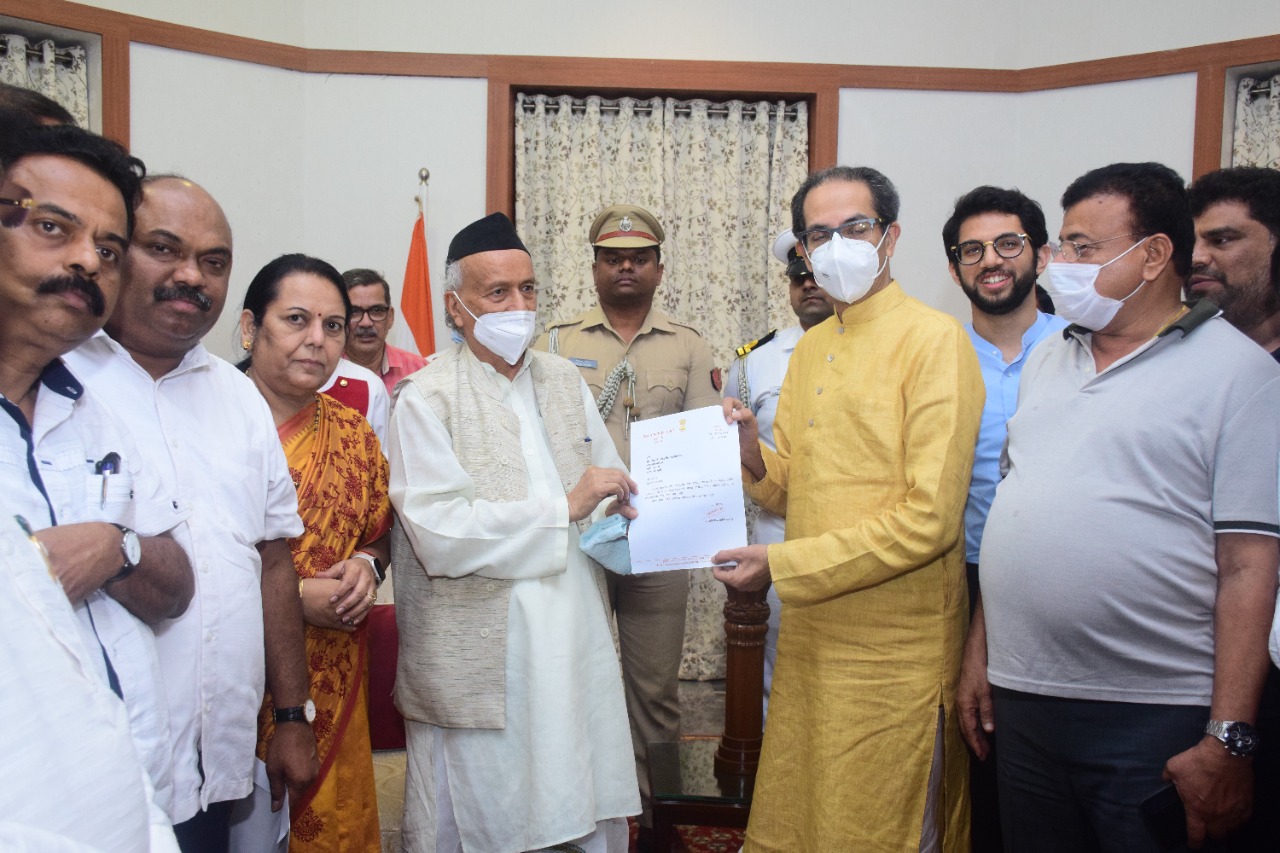 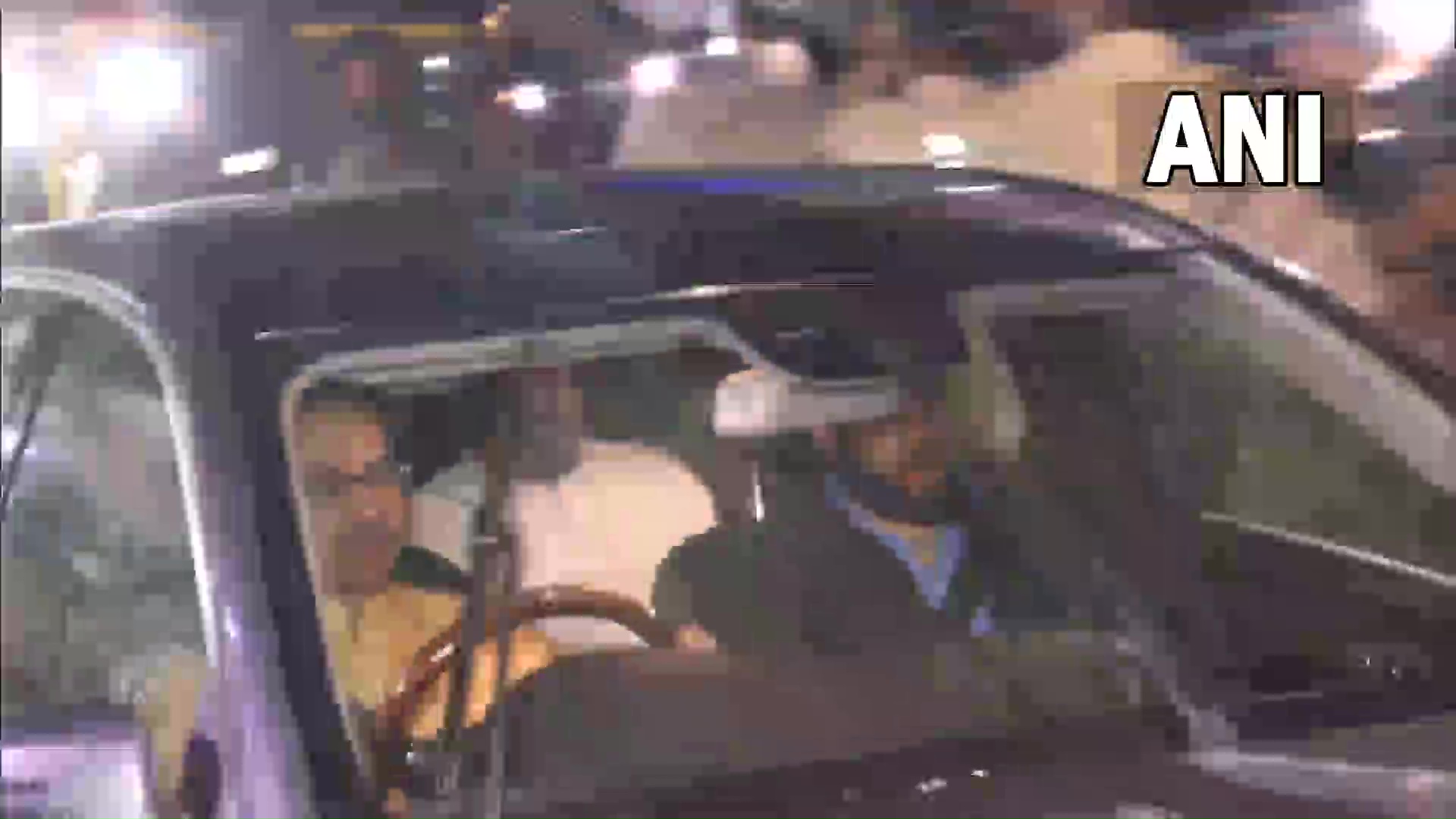 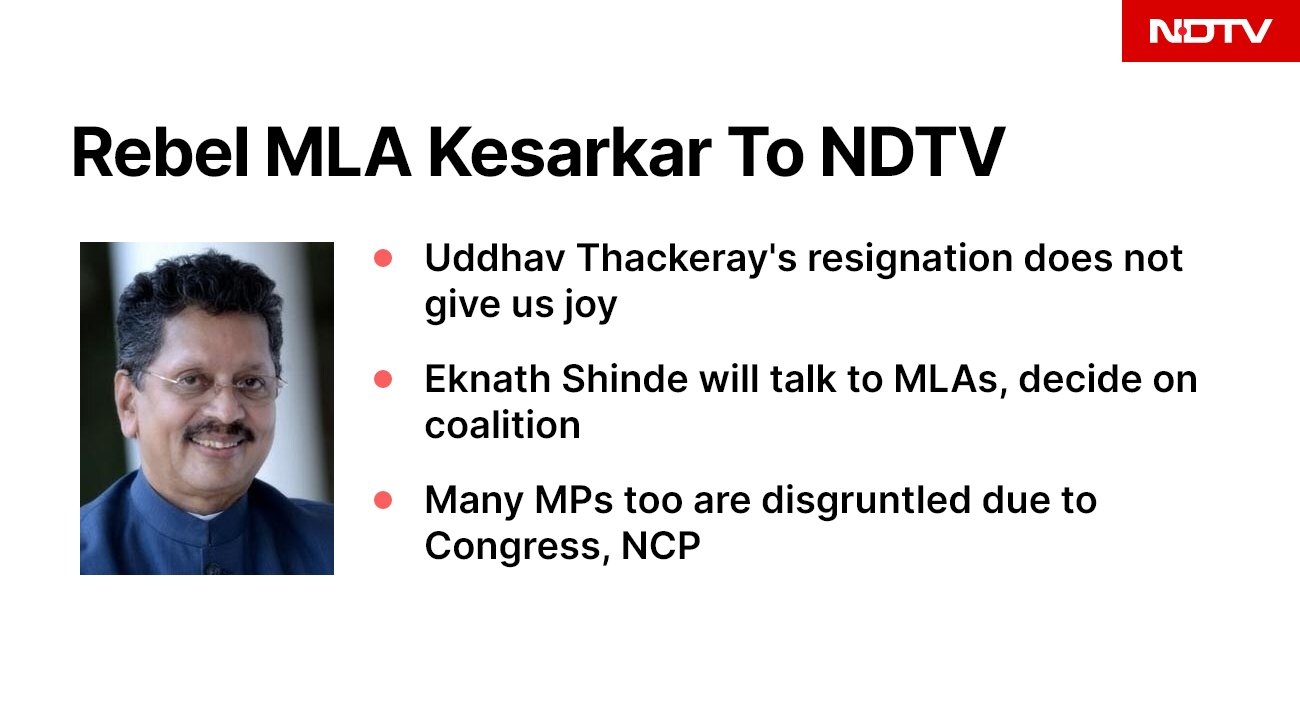 Jun 29, 2022 23:29 (IST)
Those (rebel Shiv Sena MLAs) who were reaching Mumbai tomorrow, I urge them not to come tomorrow, they should come on the day of oath-taking, says Maharashtra BJP chief Chandrakant Patil: news agency ANI 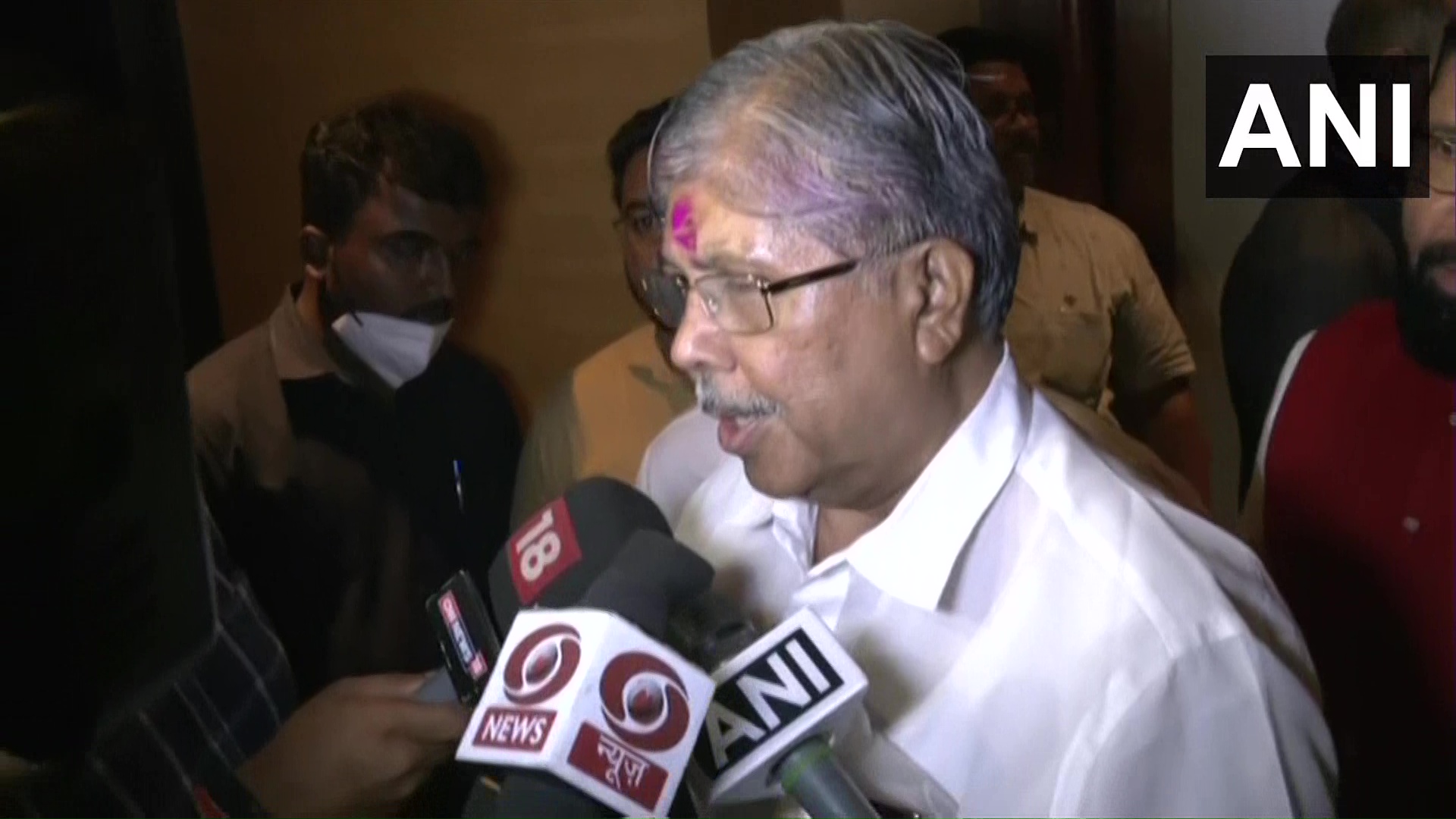 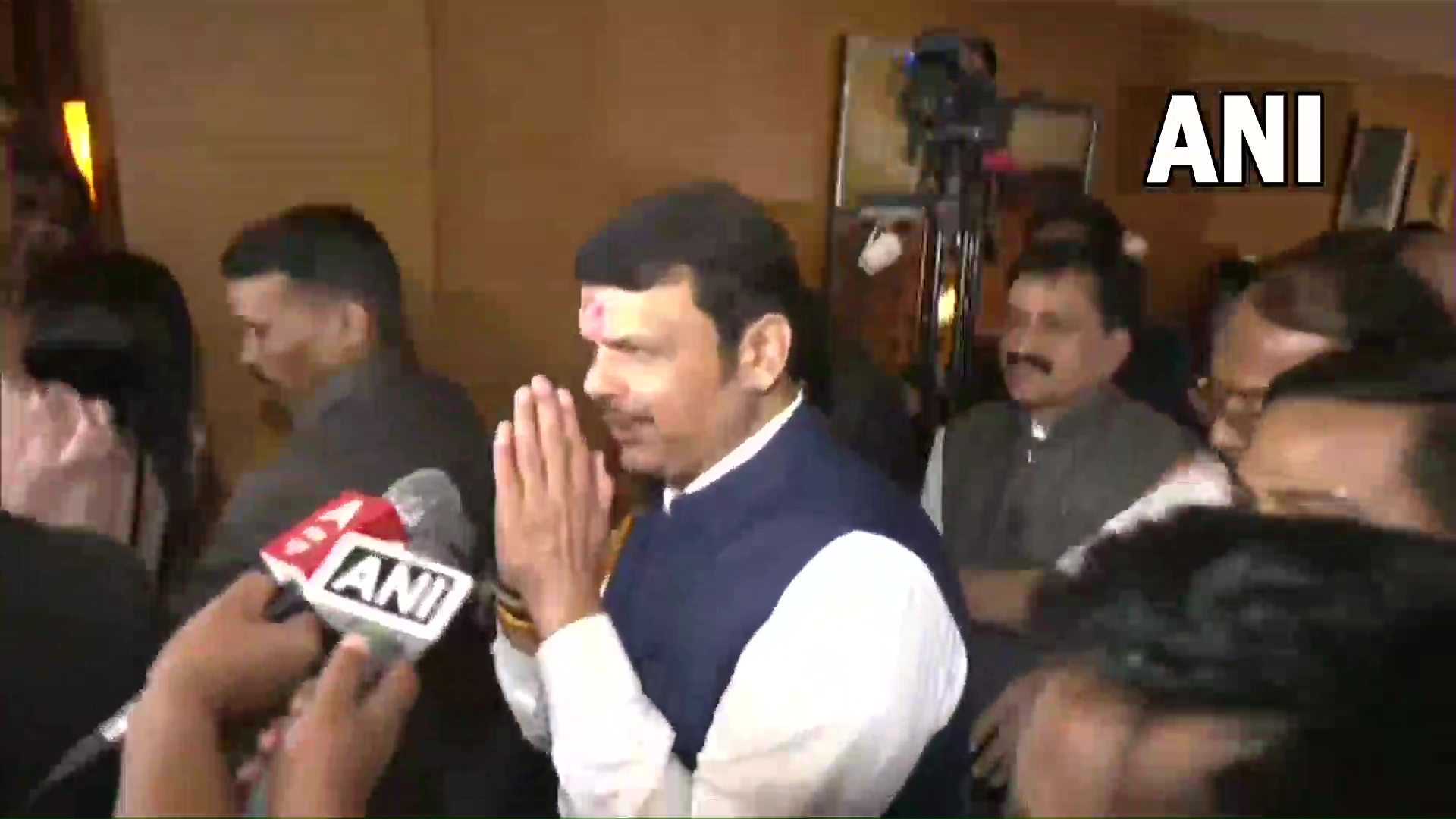 #WATCH Mumbai | Uddhav Thackeray leaves from his residence Matoshree as he drives towards Raj Bhavan to submit his resignation as Maharashtra CM to Governor Bhagat Singh Koshyari pic.twitter.com/NLmHj0jMI6

Jun 29, 2022 23:27 (IST)
Uddhav Thackeray leaves from his residence Matoshree as he heads towards Raj Bhavan to submit his resignation as Maharashtra Chief Minister to Governor Bhagat Singh Koshyari 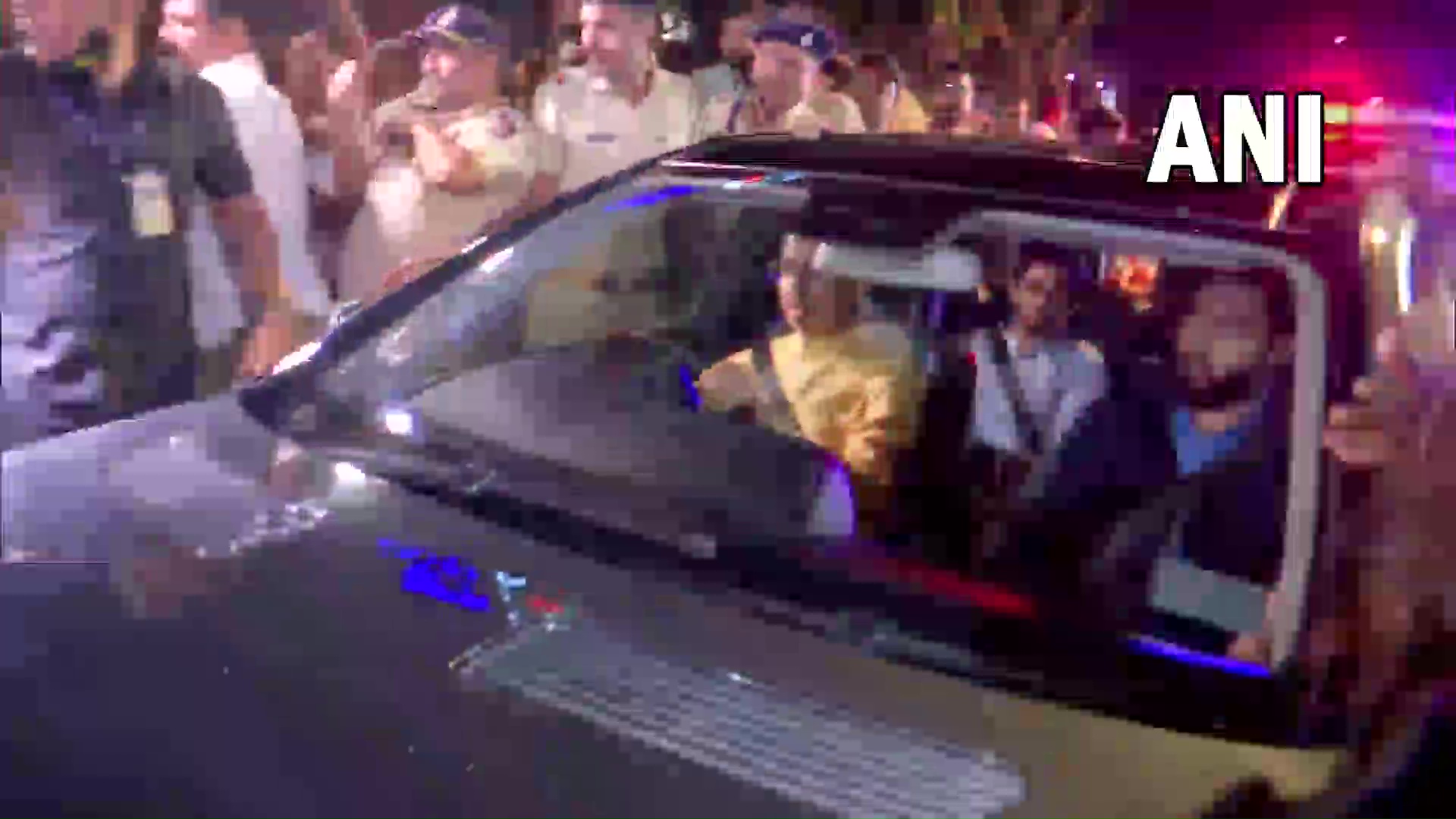 Jun 29, 2022 23:00 (IST)
Maharashtra Lost A Sensitive Chief Minister Today: Sena's Sanjay Raut
Shiv Sena MP Sanjay Raut said that Maharashtra today lost a sensitive and cultured chief minister today. Commenting on Uddhav Thackeray's resignation, Mr Raut said that the Maharashtra Chief Minister stepped down extremely gracefully.
"We have lost a sensitive and cultured Chief Minister. History tells us that fraudsters do not meet a happy end," Mr Raut said in a tweet.
He also said that this is the beginning of Shiv Sena's grand victory.
Jun 29, 2022 22:59 (IST)
Watch: Uddhav Thackeray's Full Speech Announcing Resignation
Jun 29, 2022 22:57 (IST)
BJP's Devendra Fadnavis Celebrates As Uddhav Thackeray Resigns
Celebrations started in the BJP camp this evening as Uddhav Thackeray stepped down from the Chief Minister's post. BJP leaders were seen distributing sweets, shouting slogans at Mumbai's Taj hotel. At the centre of it all was Devendra Fadnavis, who met the Governor last evening and set off the end game.
Mr Thackeray stepped down from the top post this evening, shortly after the Supreme Court ruled that his government has to take a floor test at 11 am tomorrow as ordered by the Governor. The Team Thackeray, reduced to just about 15 MLAs, had asked the court to stop the floor test called tomorrow.
With his resignation, the floor test is now void. Mr Fadnavis is likely to stake claim to form government, sources said. Rebel leader Eknath Shinde, whose move to walk out with a chunk of MLAs set off the slide, is likely to be his deputy.
There was a buzz that a negative response from the top court may push Mr Thackeray to resign. 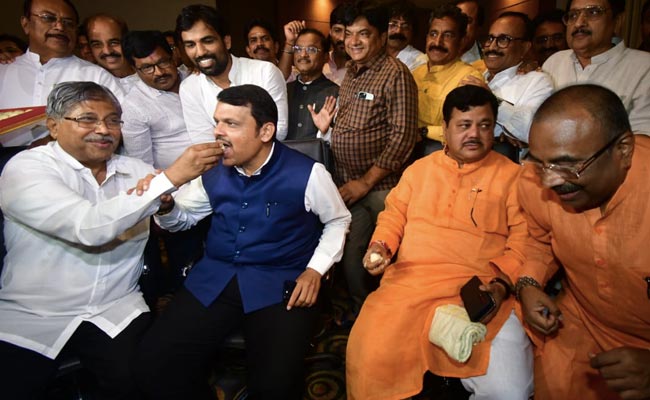 Jun 29, 2022 22:56 (IST)
5 Big Points From Uddhav Thackeray's Resignation Speech
Minutes after the Supreme Court ruled against him, Uddhav Thackeray, in a speech on Facebook, said he is resigning as Chief Minister of Maharashtra. The court had ruled that Mr Thackeray must prove his majority tomorrow in the assembly. Read more 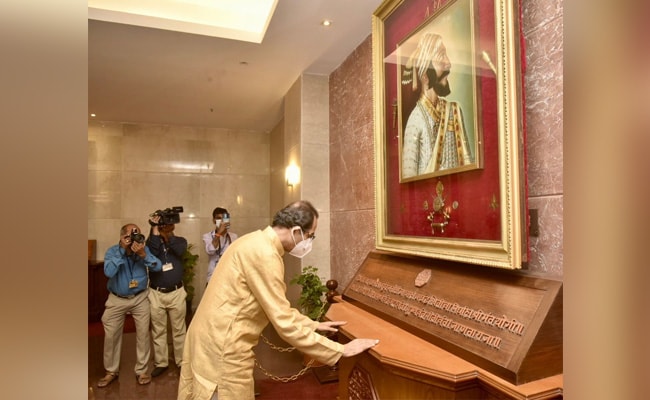 Maharashtra Crisis Live: Who'll be the next Chief Minister? https://t.co/baSsCECu1o

Maharashtra's Aurangabad Renamed To Sambhajinagar, A Long-time Sena Demand
Aurangabad was named after Mughal emperor Aurangzeb when he was region's governor; renaming it after Sambhaji has been Shiv Sena's demand.
Jun 29, 2022 19:36 (IST)
Not leaving Shiv Sena, we are the Shiv Sena: Rebel camp
The lawyer representaing the rebel MLAs in Supreme Court today said that they are not leaving the Shiv Sena, but they are the Shiv Sena. He said that Team Thackeray is a "hopeless minority" of 14.
Jun 29, 2022 19:31 (IST)
Maharashtra crisis: Prohibitory orders in Mumbai ahead of no-trust vote
Mumbai Police have stepped up security near Vidhan Bhavan ahead of the no-trust vote slated for Thursday and along the route that the rebel MLAs of Shiv Sena are likely to take from the airport, an official said on Wednesday.

Police have imposed section 144 of the CrPC banning the assembly of five or more persons and will not allow anybody to gather near the Vidhan Bhavan and surrounding areas in south Mumbai.
Jun 29, 2022 19:09 (IST)
Flight carrying rebels rakes off from Guwahati airport
The 40 rebel Shiv Sena MLAs have left Guwahati, and are now headed to Goa ahead of the no-trust vote in Maharashtra ssembly.
Jun 29, 2022 18:47 (IST)

Deputy Chief Minister Ajit Pawar and cabinet minister Chhagan Bhujbal are attending the meeting virtually as they have tested positive for coronavirus.

Up In The Air: Team Thackeray's Court Hearing, Rebels On A Flight
The Supreme Court is hearing Maharashtra Chief Minister Uddhav Thackeray's plea against an order by the governor to prove his majority tomorrow. Shiv Sena rebels, who have ignored Mr Thackeray's appeals to return, have left Guwahati.
Jun 29, 2022 17:49 (IST)
Will heaven fall if vote is not conducted tomorrow, asks Team Thackeray
"Will heaven fall if no-trust vote is not conducted tomorrow?" the lawyer representing the Maharashtra government asks the Supreme Court.
Jun 29, 2022 17:43 (IST)
Team Thackeray tells Supreme Court: "Undue and unholy haste in no-trust vote"
Jun 29, 2022 17:43 (IST)
Why should Governor decide whether 34 MLAs are this side or that: Supreme Court
During the hearing against the no-trust vote, the Supreme Court says "Why should Governor decide whether 34 MLAs are this side or that side. That is for democracy to decide. These issues (which MLA is on which side) cannot be left to the subjective views of the Governor. It is to be decided on the floor of the house."
Jun 29, 2022 17:38 (IST)
We will reach Mumbai tomorrow, says Eknath Shinde
We will reach Mumbai tomorrow and participate in the trust vote. After that, a meeting of the Legislative Party will be held, following this the further course of action will be decided, says Eknath Shinde.
Jun 29, 2022 17:33 (IST)
Supreme Court hears plea against no-trust vote
Supreme Court asks - Issue of disqualification is pending before us, but what is its relation to no-trust vote, please clarify.

Team Thackeray's lawyer argues - On one hand, court has stayed disqualification proceedings, on the other hand, MLAs are going to vote tomorrow, it's a direct contradiction.

Delayed Departure, Camp Shinde Finally Flies To Goa, Next Stop Mumbai
Suitcases were rapidly packed and then unpacked at the Guwahati hotel today where 40 MLAs of the Shiv Sena have set up base camp as they try to boot out Uddhav Thackeray as Chief Minister of Maharashtra.
Jun 29, 2022 17:09 (IST)
Rebel MLAs head to Goa ahead of no-trust vote
The rebel MLAs are heading to Goa in a chartered SpiceJet aircraft. The 39 rebel Shiva Sena MLAs and some independent MLAs are going to travel together in one aircraft to Goa and from there they are likely to travel to Mumbai.

The development came a day after Maharashtra's opposition leader Devendra Fadnavis met Governor Bhagat Singh Koshyari in Mumbai, requesting him to ask Chief Minister Uddhav Thackeray to prove majority on the floor of the Assembly.

Jun 29, 2022 16:58 (IST)
Maharashtra crisis: Rebel MLAs leave for airport
The rebel MLAs, camping in Guwahati, have left for the airport and are expected to fly to Goa with the trust vote expected to be held later this week.
Jun 29, 2022 16:41 (IST)
Ahead of Maharashtra trust vote, BJP demands protection for rebel MLAs
Maharashtra BJP leader Sudhir Mungantiwar on Wednesday met state legislature secretariat's principal secretary Rajendra Bhagwat and urged him to ensure protection to the rebel Shiv Sena MLAs, who are scheduled to arrive in the state for the no-confidence motion on June 30.
Jun 29, 2022 15:33 (IST)
Just in: Maharashtra Governor writes to Uddhav Thackeray: "Got two letters that say you are in a minority".
Jun 29, 2022 15:28 (IST)

Jun 29, 2022 14:41 (IST)
Uddhav Thackeray To Chair Key Cabinet Meeting
Chief Minister Uddhav Thackeray has called a cabinet meeting this evening at 5 pm.
Jun 29, 2022 13:38 (IST)
Not Worried About The Test Of Strength: Eknath Shinde
"We will reach Mumbai tomorrow. 50 MLAs are with us. We've 2/3 majority. We are not worried about the test of strength. We will pass all things and no one can stop us. In democracy majority matters and we're having that, Eknath Shinde said.
Jun 29, 2022 13:16 (IST)
Maharashtra Minister Nawab Malik and former Home Minister Anil Deshmukh have move the Supreme Court seeking voting rights in the floor test
Jun 29, 2022 12:59 (IST)
Sena Rebels' Last-Minute Change On Exiting Guwahati Bio-Bubble
After a visit to the Kamakhya temple, Shiv Sena rebels led by Eknath Shinde who initially planned to move from Guwahati to Goa today as Uddhav Thackeray is ordered to prove a majority in the Maharashtra assembly tomorrow morning, have returned to their hotel in a last-minute change of plans. Sources say the rebel camp might leave for Goa after the Supreme Court hearing later this evening. Read More
Jun 29, 2022 12:05 (IST)
"Shiv Sena MLAs & allies have decided to contribute Rs 51 lakhs to the Assam CM's relief fund to help the flood-affected people," tweets Rebel Shiv Sena MLA Eknath Shinde

Jun 29, 2022 11:37 (IST)
Former Maharashtra Chief Minister and leader of opposition Devendra Fadnavis has called a meeting of BJP leaders at his residence in Mumbai this afternoon
Jun 29, 2022 11:09 (IST)