The MoU, between Amol Yadav and MIDC, will lead to generation of around 10,000 jobs in the project, which will be spread over 157 acre land in Palghar district. 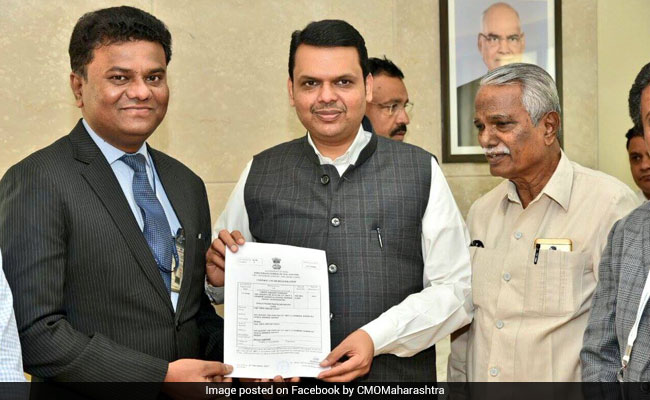 Mumbai: The dream of a commercial pilot to set up an aircraft manufacturing company is set to take wings with the Maharashtra government today signing a Rs 35,000 crore pact with him to build aircraft.

Maharashtra Chief Minister Devendra Fadnavis was present when the MoU, which envisages Rs 35,000 crore investment in the project, was signed at the "Magnetic Maharashtra" global investors summit in suburban Bandra.

The MoU, between Amol Yadav and MIDC, will lead to generation of around 10,000 jobs in the project, which will be spread over 157 acre land in Palghar district.

Last year, Mr Fadnavis had assured all help to Mr Yadav, 42, who hails from Satara district, to start manufacturing facility for indigenous 6-seater and 19-seater aircraft.

"I have to make planes. I have demonstrated the capabilities. Fadnavis wants the first plane making factory of the country to be in Maharashtra. The 157-acre plot was identified in Palghar. The MIDC will provide us land and support facilities like roads," Mr Yadav told PTI.

"My responsibility is to build the plane and create the factory which will be producing more, and also to look after factories to be set up henceforth. This will be an aerospace hub to make planes," he said.

Maharashtra government will help in getting the required funds, Mr Yadav said. "The government expects Rs 35,000 crore investment for not my company alone, but also for the ancillaries which will be a part of the hub," he said.

"Rs 35,000 crore is the total amount of funds which will be required to achieve the broader targets. The target is to create employment for 10,000 people. The investment figure is included in the MoU agreement but it will not be coming from me alone," he said.

"In the first phase, I am required to build a prototype 19-seater plane and three more similar planes for production. The investment required for this will be Rs 200 crore, which is the immediate requirement and will be spent in the next six months," he said.

"We have already identified many potential investors," Yadav said. The government will also help, he added.

"Pratt & Whitney is supplying me the engines at present. The engine supplied to me is 30 years old and tested one," he said, adding he "fully owns" the company.

Promoted
Listen to the latest songs, only on JioSaavn.com
His six-seater aircraft was the centre of attraction during the Make In India exhibition held in Mumbai in 2016.

The aircraft, that was assembled on the terrace of a Charkop building, got the certificate of registration from the Directorate General of Civil Aviation (DGCA) last year.