Devendra Fadnavis's First Signature Of New Term Was On This Cheque

Maharashtra Government 2019: Devendra Fadnavis returned to the Mantralaya, the state secretariat building in south Mumbai even as the political drama over the weekend developments continued. 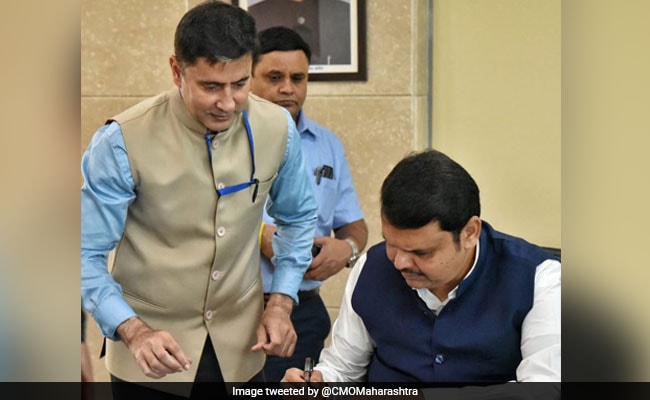 Devendra Fadnavis, who took oath as Maharashtra Chief Minister for a second term on Saturday in an extraordinary move that left rivals stunned, got down to work on Monday.

Mr Fadnavis returned to the Mantralaya, the state secretariat building in south Mumbai even as the political drama over the weekend developments continued.

The first thing that the 49-year-old did was signing a cheque. He put down his signature for the first time in his second term, on a cheque for the Chief Minister's Relief Fund. The newly-appointed Chief Minister was seen handing over the cheque to a woman.

"CM Devendra Fadnavis' first signature of this tenure was done on a #CMReliefFund cheque, on reaching Mantralaya, which was handed over to Kusum Vengurlekar by CM," the Chief Minister's Office tweeted.

CM Devendra Fadnavis' first signature of this tenure was done on a #CMReliefFund cheque, on reaching Mantralaya, which was handed over to Kusum Vengurlekar by CM. pic.twitter.com/x43LtP6cbG

Mr Fadnavis took charge after the Supreme Court, in an 80-minute hearing, said it would declare its decision on Tuesday on a petition challenging the surprise government formation by the BJP.

Intense politics unfolded moments on Saturday after Mr Fadnavis's oath ceremony suddenly flashed on TV screens at around 8 am. In a surprise move, Ajit Pawar of the Nationalist Congress Party (NCP) took oath as his deputy. Hours before that, at 5:47 am, President's rule was after a signoff by President Ram Nath Kovind.

Hours before the swearing-in, NCP had sealed a Shiv Sena-led alliance along with the Congress on Friday evening. Ajit Pawar's uncle Sharad Pawar, who heads the NCP, has maintained that his party is still with the Shiv Sena and its chief Uddhav Thackeray.

In the Supreme Court on Monday, the centre argued that Governor Bhagat Singh Koshyari invited Mr Fadnavis to form government in Maharashtra based on a letter showing the support of 170 MLAs, including all 54 of Ajit Pawar's NCP. On the other hand, the rival group of Shiv Sena-NCP-Congress submitted documents claiming the support of 154 MLAs and called for an -immediate- test of strength in the Maharashtra assembly.

As the arguments went on in the courtroom in Delhi, in Mumbai, the Sena, the NCP and the Congress staked claim to power in Maharashtra after submitting signatures of support from 162 MLAs to the Governor. The three parties claim the support of enough MLAs for a majority in the 288-member Maharashtra assembly.