Chief Minister Eknath Shinde and Fadnavis announced lifting of the stay on the construction of Metro-3 car shed in the Aarey Colony. 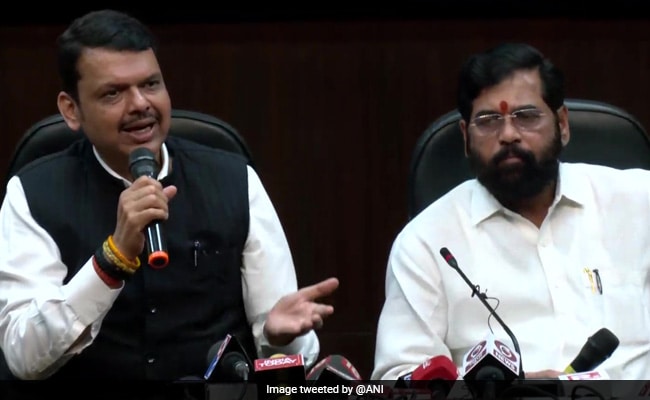 In an important decision, the new government in Maharashtra on Thursday announced lifting of the stay on the construction of Mumbai Metro-3 car shed at the controversial site in the Aarey Colony, a green belt in the western suburbs.

The move came a day after Deputy Chief Minister Devendra Fadnavis, at a meeting with Consul General of Japan in Mumbai Fukahori Yasukata, assured him of fast-tracking Japan International Cooperation Agency (JICA)-funded projects, which include the Mumbai Metro's Line 3.

Addressing a press conference, Chief Minister Eknath Shinde and Fadnavis announced lifting of the stay on the construction of Metro-3 car shed in the Aarey Colony in suburban Goregaon, reversing a decision taken by the previous Shiv Sena-led Maha Vikas Aghadi (MVA) government and one which will surely invite criticism from environmental groups and some political parties.

Just before the 2019 Assembly elections, the proposed car shed in the wooded area had widened the gap between the then-ruling allies Bharatiya Janata Party and the Shiv Sena. The Shiv Sena had bitterly opposed the Aarey car shed project and demanded relocation of the depot at a site in the eastern suburb of Kanjurmarg, whose ownership was later claimed by a private party as well as the salt commissioner of India.

Shiv Sena president Uddhav Thackeray, on becoming chief minister in November 2019, had ordered a stay on the car shed construction in the Aarey Colony, and the ligitation over the Kanjurmag site stalled the entire project for the next two-and-a-half years.

After Mr Shinde and Mr Fadnavis took oath on June 30, the latter made it clear the new government wants the Metro-3 car shed back in the Aarey Colony site and now relevant orders have been given to the state Urban Development Department.

Mr Fadnavis said, "The Supreme Court has already given permission for the construction of Metro-3 car shed at the Aarey site. Despite this, if some environmentalists still want to oppose the construction of the car shed, then their intentions would come under suspicion." The chief minister highlighted benefits of the 33.5km-long Line 3 of Mumbai Metro, which will connect Colaba in south Mumbai to SEEPZ (Andheri) in the suburbs.

Mr Shinde said, "One must understand that once the Metro-3 line becomes operational, it would carry 17 passengers on a daily basis. The entire project is funded by the JICA and any further delay in its completion could have affected the other big-ticket projects as well."

Asked about then-chief minister Uddhav Thackeray's decision to put a stay on the controversial project, Mr Fadnavis said, "It was sheer ego and nothing else."

"Thackeray, after becoming the chief minister, appointed a committee headed by then-additional chief secretary (finance) Manoj Saunik. The committee had recommended that the Metro-3 car shed be constructed at the Aarey site instead the land parcel available at Kanjurmarg. Thackeray set aside the recommendation and stayed any further construction at the Aarey site," he said.

Mr Fadnavis said the Aarey Colony site was finalised when the Congress-NCP combine was in power in the state.

"One should not forget that the Aarey site was finalized by then-chief minister Prithviraj Chavan when the Congress and the NCP were in power. Post-2014, the BJP-Sena government only availed international loan for it and started implementing the project," Mr Fadnavis said.