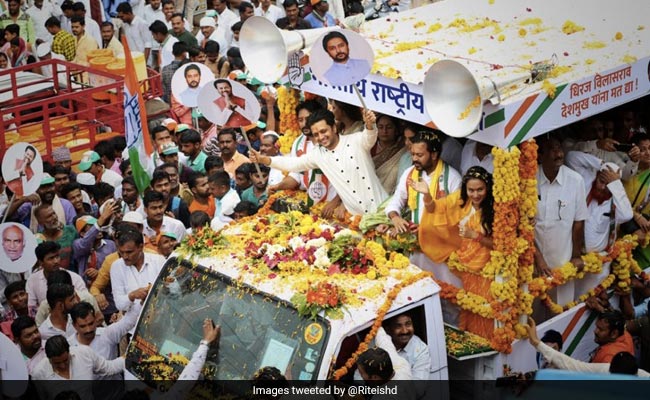 Bollywood actor Riteish Deshmukh, son of the late former Maharashtra Chief Minister Vilasrao Deshmukh, took to twitter today to congratulate his brothers Amit Deshmukh and Dhiraj Deshmukh after they were elected to the state Assembly from the Latur (City) and Latur (Rural) seats, respectively. Contesting on Congress tickets, the Deshmukh brothers both recorded massive wins, with Amit, now a three-time MLA, beating the BJP's Shailesh Lahoti by 38,217 votes and Dhiraj polling 1.3 lakh votes to register a landslide.

In his tweet, which is accompanied by a dramatic photograph of him dressed in a white kurta and staring intently into space and another of the three brothers together during campaigning, Riteish Deshmukh has tagged his brothers and thanked the people of Latur for their "faith and trust". The tweet also contains a reference to Vilasrao Deshmukh, a veteran Congress leader who served two terms as Chief Minister of Maharashtra.

Thank you people of Latur for this faith & trust. pic.twitter.com/pOGFsmoEJU

Vilasrao Deshmukh, who died in August 2012, was targeted by Union Minister Piyush Goyal ahead of Lok Sabha elections in May. The BJP leader said the former Chief Minister had been more concerned with getting his son a role in Bollywood than fulfiling his public duties.

Both Riteish Deshmukh and his wife Genelia, who is also an actor, spoke out during polling day on October 21, urging the people of Latur to go out and vote.

"I think everyone, along with their friends and families should go on and vote. My two brothers are contesting and I have campaigned for both but I believe they will win based on the work done by them," Riteish Deshmukh told news agency ANI.

The Congress, in alliance with the Nationalist Congress Party (NCP), has performed better than expected in Maharashtra polls, with the two winning 97 seats and leading in one more, according to the Election Commission of India's website.

Although it will not be enough to upset the ruling BJP-Shiv Sena alliance, which has won 104 and is leading in one other, the results have offered the opposition in the state some cheer ahead of the festive Diwali season.

The Maharashtra Assembly has 288 seats with the halfway mark set at 145.

NCP chief Sharad Pawar, 78, who single-handedly led the opposition's campaign in the state, today said the results and trends showed the people of Maharashtra did not like the arrogance of power.

The veteran also said "defections had not been accepted by people, with some exceptions," in a dig at leaders who quit both his party and the Congress and crossed over to the BJP and the Sena before the elections.