Will Allocate Portfolios By Tuesday Or Wednesday: Uddhav Thackeray

The governor made Bhagat Singh Koshyari take oath again after the Congress MLA deviated from the written text of the oath of office and spoke some lines extempore. 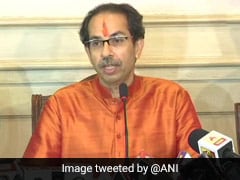 Two members each of the Shiv Sena, NCP and the Congress had taken oath on November 28

Hours after carrying out the much-awaited expansion of his Cabinet, Maharashtra Chief Minister Uddhav Thackeray on Monday evening said that allocation of portfolios would be done in a "day or two".

Talking to reporters after attending a Cabinet meeting, Mr Thackeray said, "allocation of portfolios would be done by tomorrow (Tuesday) or a day after (Wednesday)".

When asked about Governor Bhagat Singh Koshyari reprimanding Congress leader KC Padvi in the midst of the oath-taking ceremony at the Vidhan Bhavan, Mr Thackeray sought to downplay the incident.

The governor made Mr Padvi take oath again after the Congress MLA deviated from the written text of the oath of office and spoke some lines extempore.

Speaking on a controversy over some objectionable graffiti defacing the walls of Maharashtra Chief Minister's official residence ''Varsha'' in Malabar Hill, Mr Thackeray said, "those who want to paint the walls can do so, but we will prove ourselves with our work".

Recently, certain pro-BJP scribblings were found on the walls of the bungalow.

The expanded council comprises 26 ministers of Cabinet and 10 others with the Ministers of State (MoS) rank.

Two members each of the Sena, NCP and the Congress had taken oath on November 28, alongside chief minister Uddhav Thackeray.