A total of 28 seats are available in this by-poll and the Congress must win all to even think about returning to power, while the BJP needs only nine

The Election Commission may have put the brakes on the Congress's Madhya Pradesh by-polls plans by dropping Kamal Nath from the party's "star campaigner" list, but there is a bigger and more interesting story brewing behind the poll body's reprimand of the former Chief Minister.

Many feel the focus of these by-polls will be the contribution of the BJP's Jyotiraditya Scindia - the former Congress leader whose controversial cross-over (with that of 22 MLAs) in March triggered the fall of the Kamal Nath government and paved the way for the return of Shivraj Singh Chouhan as Chief Minister.

The numbers game ahead of the by-polls is simple.

A total of 28 seats are available (including the 22 vacated by Mr Scindia's loyalist MLAs) and the Congress must win all to even think about returning to power.

The BJP needs to win only nine to ensure its government is, for now, untouchable.

For Jyotiraditya Scindia, 49, though, the math is a little different.

Mr Scindia, a four-time Lok Sabha MP from Guna, must ensure that the 22 MLAs who resigned from their constituencies to support him are re-elected.

For him this election is about his stature as a political leader in the region and the influence he commands (or may not), particularly since 16 of the available seats are from the Gwalior and Chambal regions that are widely regarded as strongholds of the Scindia family.

"This election is not only about the Congress and the BJP. It is also about the prestige of this area... of the Gwalior-Chambal area," Mr Scindia tells voters gathered at an rally in Sihonia, which is around 50 km from Gwalior. 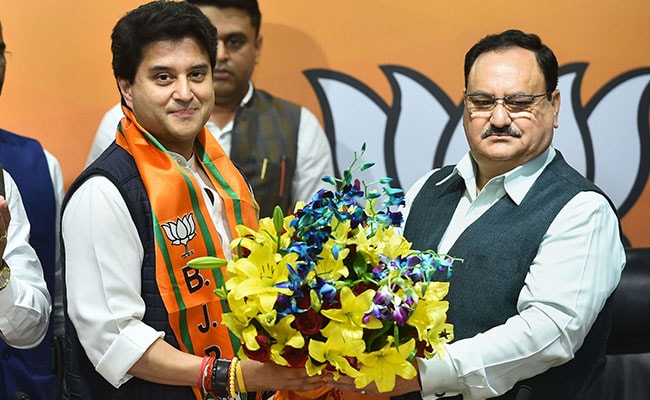 Mr Scindia, wearing a grey kurta and with a BJP scarf wrapped around his neck, pauses for a moment as he speaks and runs his hand through his hair in a dramatic flourish.

The Congress isn't the only challenger to Mr Scindia's need to prove himself to his new party (and the people). The BSP is also contesting every seat in this by-poll.

But Mr Scindia isn't too worried about Mayawati's party. "We have to focus on our campaign... our issues... and stick to our ideology," he tells NDTV as he jet-sets from one rally to another.

This next one - at Morena - is important. Top members of the BJP - including Chief Minister Chouhan, former Chief Minister Uma Bharti and Union Minister Narendra Singh Tomar - will be sharing a stage with Mr Scindia - a sort of on-ground examination.

Uma Bharti, whose relationship with Mr Scindia's family goes back to the days of Rajmata (Queen Mother) Vijaye Raje Scindia, bats for her grandson.

"Don't just pay lip-service. We need your whole-hearted support," she tells the Morena crowd, asking them to bless Mr Scindia. 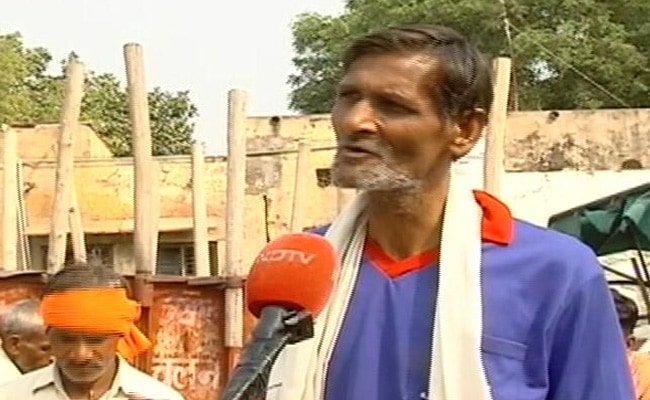 "It would have been good if a government lasts for five years," a voter told NDTV

Uma Bharti, a seasoned politician, can sense the voters' mood and the BJP, a party now used to winning elections, realises these by-polls are not usually well-received by voters, particularly when they've been turned out to vote because elected MLAs want to switch parties.

"It would have been good if a government lasts for five years. We are BJP supporters but these allegations of horse-trading (made by the opposition Congress which alleges the BJP poached its 22 MLAs) affect voters," Mohan Sharma, a farmer at the Gohad mandi, says

Banwarilal Sharma, a daily-wage worker at the same market, is even more vocal.

"Having to conduct elections again and again is a huge expense. Who pays for this? The tax-payer... the public," he says.

How will these sentiments translate into votes?

The Madhya Pradesh by-polls may not, barring unexpected results, affect the Shivraj Singh Chouhan government too much, but it could have a say on just how much political clout Jyotiraditya Scindia will have in a party he has only just joined.

UP Man Cuts Off Daughter's Head, Walks With It In Village