Mr Gandhi on Sunday targeted the BJP-RSS for their "anti-Dalit" mindset and alleged that as per the "fascist ideology" of these outfits, Dalits should continue to remain on the bottom rung of society. 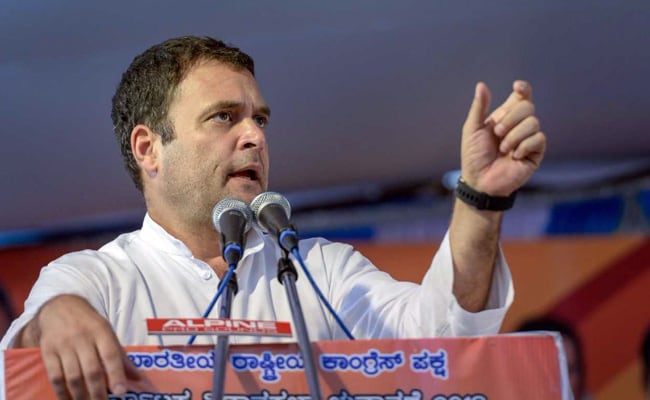 Nagpur: On a day Rahul Gandhi put up a video highlighting the "anti-Dalit" statements of BJP and RSS leaders, the Sangh hit back and accused the Congress president of indulging in "low level politics" and misguiding the society with "lies".

"Rahul Gandhi in his official FB page has posted lies about me and RSS sarsanghchalak Mohan Bhagwat that we want to abolish the reservation given to the SCs and STs in the Constitution, which is absolutely baseless and false without any official reference or source," RSS joint general secretary Manmohan Vaidya said in a statement issued here.

Mr Gandhi on Sunday targeted the BJP-RSS for their "anti-Dalit" mindset and alleged that as per the "fascist ideology" of these outfits, Dalits should continue to remain on the bottom rung of society.

He also questioned the "silence" of Prime Minister Narendra Modi on the rising incidents of atrocities against Dalits in the country.

The two-minute-long video put up by Gandhi cites incidents of alleged atrocities, including the flogging of a few Dalit men in Gujarat's Una in 2016 and the recent SC/ST markings on the chest of Dalit candidates during a recruitment exam in Madhya Pradesh.

"Central to the RSS/BJP fascist ideology, is that Dalits and Adivasis must continue to exist at the bottom rung of society. In this disturbing video, the dangers of this mindset and how it's openly propagated by senior RSS/BJP leaders is revealed," Mr Gandhi wrote on Twitter, using the hashtag -- "AnswerMaadiModi".

Mr Vaidya said SCs and STs have been provided with reservation in the Constitution due to prevalent social inequality in the Hindu society.

Promoted
Listen to the latest songs, only on JioSaavn.com
"It is the official stance of the RSS that reservation should continue which the Sangh has proved from time to time by passing resolutions about it in its Akhil Bhartiya Pratinidhi Sabhas," it said.

"Sangh is determined to remove social inequality and create social harmony in the society. We strongly condemn the low level politics of Rahul Gandhi and the Congress party," Mr Vaidya stated.