"This is not a once-in-a-lifetime or a once-in-a-century event. This is an event that comes once in the life of mankind. We had to give it a befitting celebration and what better place than the iconic Times Square to commemorate the 'Ram Janma Bhoomi shilanyas," Mr Sewhani said. 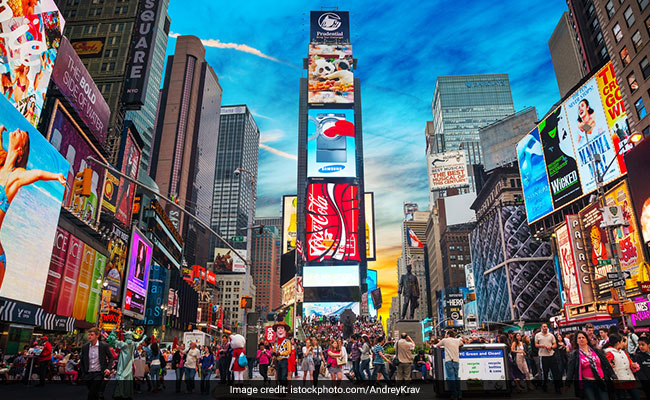 Images of Lord Ram and 3D portraits of the grand Ram Temple in Ayodhya will be beamed across the giant billboards in the iconic Times Square in New York on August 5 to celebrate the temple's groundbreaking ceremony, with organisers describing the commemoration as a one-of-a-kind and historic event.

Prominent community leader and President of the American India Public Affairs Committee Jagdish Sewhani on Wednesday said that arrangements are being made to celebrate the historic moment in New York on August 5, when Prime Minister Narendra Modi is scheduled to lay the foundation stone for construction of the Ram Temple in Ayodhya.

Mr Sewhani told news agency Press Trust of India that among the prominent billboards that are being leased for the occasion are the giant Nasdaq screen and the 17,000-square-foot wrap-around LED display screen, considered among the largest continuous exterior displays in the world and the highest-resolution exterior LED screen in Times Square.

Beginning from 8 a.m. on August 5 till 10 p.m., images of the words 'Jai Shri Ram' in Hindi and English, Lord Ram's portraits and videos, 3D portraits of the temple's design and architecture as well as pictures of the laying of the foundation stone by Prime Minister Modi will be displayed across several billboards, which are among the most striking and popular features of Times Square, one of the most popular tourist destinations in the world.

Mr Sewhani said that members of the Indian community will also gather at Times Square on August 5 to mark the celebration and distribute sweets.

"This is not a once-in-a-lifetime or a once-in-a-century event. This is an event that comes once in the life of mankind. We had to give it a befitting celebration and what better place than the iconic Times Square to commemorate the 'Ram Janma Bhoomi shilanyas" (groundbreaking ceremony), Mr Sewhani said.

"Under Prime Minister Modi, the construction of the Ram Temple is a dream come true for Hindus all over the world. Till six years back, we never thought that this day will come soon but due to Prime Minister Modi's leadership, this day has come and we want to celebrate it in a befitting way," he said, adding that on August 5, images of Lord Ram will flood Times Square.

Mr Sewhani said that the Times Square commemoration is being made possible with the help and support of the community and sponsors.

Prime Minister Modi had announced the formation of the Shri Ram Janmabhoomi Teertha Kshetra Trust in February. The Trust has invited PM Modi to lay the foundation stone of the grand Ram Temple.